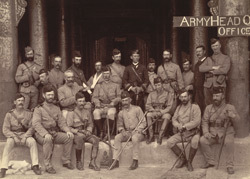 Photograph of General Prendergast and many of his
staff, taken in front of the Hall of Audience in the Royal Palace
at Mandalay in Burma (Myanmar) by Willoughby Wallace Hooper on 17th
December, 1885. The photograph is from a series documenting the
Third Anglo-Burmese War (1885-86) made by Hooper while serving as
Provost Marshal with the British army. General Sir Harry
Prendergast (1834-1912) comma…