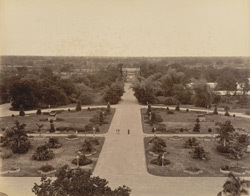 Photograph of the front gate of the Makarpura
Palace near Baroda, Gujarat from the Curzon Collection, taken by an
unknown photographer during the 1890s. There are two palaces at
Makarpura, situated to the south of Baroda. They were built by the
Gaekwad Maharajas during the 19th century as country residences and
are set in English-style formal gardens. Sayaji Rao III (ruled
1875-1939) enlarged and …