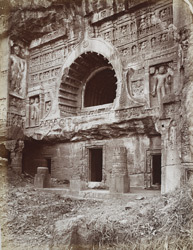 Photograph of the facade of Cave 27, at Ajanta.
The thirty magnificent cave temples of Ajanta are situated in a
horse-shoe valley of the Waghora river in West India and consist of
prayer halls (chaityas) and monasteries (viharas), built for the
Buddhist community who lived there. The first group was excavated
between the 2nd - 1st century BC. After a period of more than six
centuries, the excavati…