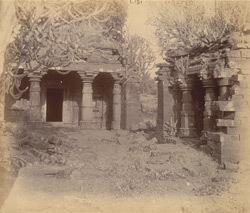 Photograph of a group of six ruined temples near
the village of Anjaneri, Nasik District taken by Henry Cousens
either in the 1880s or the 1890s. Anjaneri is situated in northern
Maharashtra. A large number of temples were built here
independently of one another, unusual for temples of such a small
size. They are not clustered around a central shrine in the manner
that most small Indian temples ar…