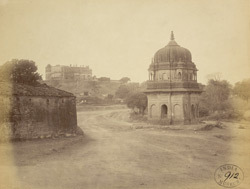 Photograph of the Cenotaph and Palace of the
Rajah of Datia at Datia in Madhya Pradesh taken by George Edward
Herne in 1869. Datia is built on a series of low hills and is
famous for the Nrising Dev Palace, also known as the Govind Mandir,
built around 1620 by Rajah Bir Singh Deo and considered one of the
best surviving examples of early 17th Century Rajput architecture.
Just outside the town is t…