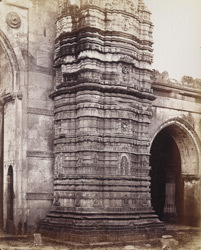 Photograph of the facade of the Bibi-ki Mosque,
at Rajpur, Ahmadabad in Gujarat taken by Henry Cousens in the
1880s, from the Archaeological Survey of India. This mosque, one of
four in Rajpur, was built in 1454. It it is vast structure with
five large domes. There are five mihrabs with carved decoration of
rosettes and chain and censor details. At the north end of the
mosque is a royal gallery en…