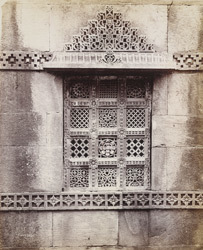 Photograph of a perforated windows in the Malik
Sarang Mosque or Queen's Mosque at Sarangpur, Ahmadabad in Gujarat,
taken by Henry Cousens in the 1880s, from the Archaeological Survey
of India. Situated by the Sarangpur Gate, this mosque was built in
c.1530 by Malik Quivam ul Mulk Sarang, a nobleman at the court of
Sultan Muzaffar Shah (r.1511-26), who became governor of the city
in 1521. The mosq…