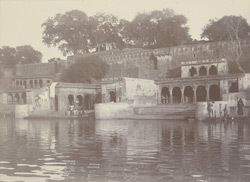 Photograph from the Curzon Collection: 'Vist of
His Excellency the Viceroy. Kotah, November, 1902' of the riverbank
at Kota, taken by P.A. Herzog and P. Higgins in 1902. The Rajput
city of Kota was founded in the 14th century within the borders of
the state of Bundi, but became the capital of an independent
princely state in 1625. It lies on a plain in the hilly south of
Rajasthan, and is situated…