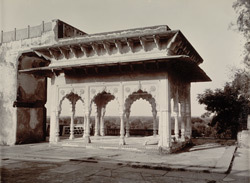 Photograph from the Curzon Collection of a
baradari at Jawahur Burj in the Lohagarh Fort at Bharatpur,
Rajasthan, taken by the studio of Priyalall & Company in
c.1900. The fort was built in 1733 by the Jat king Suraj Mal (ruled
1733-63) and stands in the north-west corner of the walled city of
Bharatpur. It had massive double ramparts made of mud and rubble
reinforced by bastions, surrounded by a …