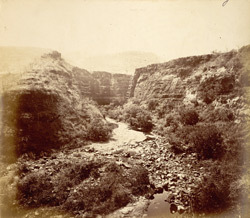 Photograph of the verandah of Cave I at Ajanta,
taken by Robert Gill around 1868-70. The Buddhist cave temples of
Ajanta were excavated into a horse-shoe shaped cliff overlooking
the Waghora River during two time periods; firstly, the2ndâ€“1st
Century BC and secondly, during the 5th Century AD. The caves are
numbered 1-28 according to their location, not chronologically.
They consist of monasterie…