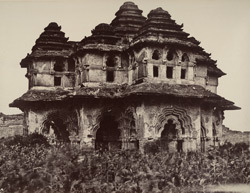 Photograph of the Lotus Mahal at Vijayanagara,
taken by Andrew Charles Brisbane around 1856. Vijayanagara, the
City of Victory, was the seat of a powerful Hindu kingdom in
Southern India from 1336 to 1565. The kingdom was founded by two
brothers, Harihara and Bukka, formerly chieftains with the Delhi
Sultanate. Vijayanagara flourished as a prosperous centre of Hindu
art, culture and architecture, …