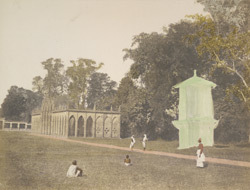 A hand-coloured print of Barakpur Park, from the
Fiebig Collection: Views of Calcutta and Surrounding Districts,
taken by Frederick Fiebig in 1851. Barrackpore, 24 km to the north
of Calcutta on the river Hooghly, was originally permanent barracks
for the British army and later became the summer residence of the
British Governor Generals. Marquess Wellesley was British
Governor-General in Calcutta…