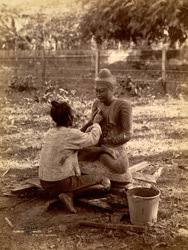 Photograph of a Burmese sculptor at work, taken
by Philip Adolphe Klier in the 1890s. This view shows the sculptor
carving an image of a seated Buddha in clay or wax, before casting
the sculpture in bronze using the lost wax method. Theravada
Buddhism was adopted as the Burmese national religion in the 11th
century.Burmese art has historically been intertwined with Buddhism
and Buddha images are c…