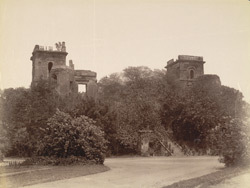 Photograph of the ruined Dilkusha palace at
Lucknow in Uttar Pradesh, taken by an unknown photographer in the
1880s, part of the Bellew Collection of Architectural Views.
Lucknow on the Gomti river first attained prominence in the 15th
century under the Sharqi sultans of Jaunpur. Later it was ruled by
Mughal governors. By the 17th century it was a prosperous
commercial centre, and continued to flo…