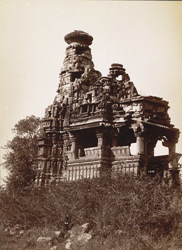 Photograph of the Brahma Temple at Khajuraho in
Madhya Pradesh, taken by Deen Dayal in 1871-72, part of the Bellew
Collection of Architectural Views of India. The small town of
Khajuraho in the Chatarpur district is the site of dozens of Shiva,
Vishnu and Jaina temples, which were built between the 9th and 12th
centuries under the aegis of the Chandella dynasty which ruled in
central India. Of abo…