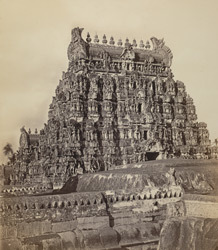 Print from an album of 38 albumen prints by
Edmund David Lyon. Avudayar Koil is 45 kms south-east of Pudukottai
in Tamil Nadu. The temple, noted for its granite roof-work, was
formerly known as Thiruperundurai and is dedicated to the worship
of Shiva as Atmanatha. The Nayanar poet-saint Manickavasagar is
believed to have founded the temple in the 8th century under the
Pandyan dynasty, but its pres…