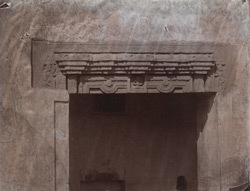 This photograph of an architrave above a doorway
or window in the temple at Damdama, Hazaribagh District was taken
by Joseph David Beglar in the 1870s and forms part of the
Archaeological Survey of India Collections (Indian Museum Series).
Damdama is located in the modern state of Jharkand. The site is
made up of a number of mounds in which were found large eighteen
inch bricks, indicating antiqui…