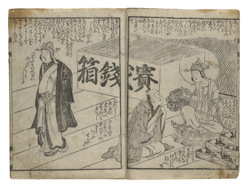 This work, entitled 'Kareki hana sakusha no
seigan' and printed in 1791, is an example of the genre of popular
fiction known in Japanese as 'kibyoshi' (yellow-cover books) which
flourished in the late 18th and early 19th centuries and were often
based on adaptations of Buddhist themes. These novels were aimed at
a mass market and were woodblock-printed in large large numbers.
This example is illus…