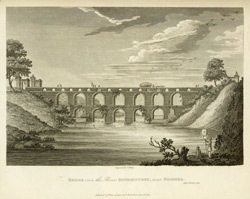 Plate eighty-seven from the third volume of James
Forbes'"Oriental Memoirs". In the beginning of 1781
Forbes(1749-1819)accompanied the chief of Bharuch, Robert Gambier
on a tour through the various districts of Gujarat. After a halt at
Dhaboi they set out for the royal city of Baroda. At Baroda, Forbes
especially noted the stone bridge over the river Vishwamitri,
'consisting of two ranges of arche…