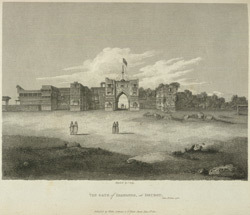 Plate fifty-eight from the second volume of James
Forbes' "Oriental Memoirs". Forbes(1749-1819) was made Collector of
Dhaboi, the only fortified town in the district, in 1780. Close to
his residence at the Darbar (the Governor's mansion)was a
picturesque ...and ruined Hindoo temple, nearly covered with
moss...One of the Gates of the temple was called the 'Gate of
Diamonds' after the principal imag…