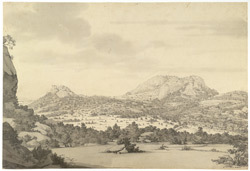 Wash drawing of a south west view of Ootradroog
by Robert Home (1752-1834) in 1792. It is one of a series
comprising 22 loose drawings together with a map and three plans
completed by Home when he accompanied the British army under
Cornwallis during the 3rd Mysore War 1791-1792.The Anglo-Mysore
Wars of the late 18th century were fought between the British and
the Mysore rulers Haidar Ali (r.1761-1…