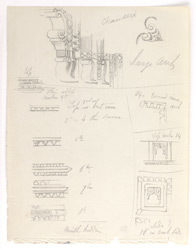 Pencil drawing by Frederick Charles Maisey of
architectural details from Chanderi, dated 1845 - 1852.Chanderi,
situated strategically on the borders of Malwa and Bundelkhand, was
an important an military outpost. The history of the place goes
back to the eleventh century when it was an important post amongst
the trade routes of Central India. Chanderi has several historical
monuments of the Bundel…