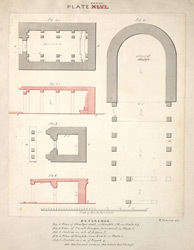 Pen and ink and wash drawing by Frederick Charles
Maisey of the plans and sections of temples at Sanchi, inscribed:
'Plate' 'XXXVII', with notes.The Buddhist site of Sanchi is of
outstanding importance for the number and variety of its monuments
and sculptures. The site has numerous Buddhist structures, mostly
stupas, built between the third century BC and the sixth to seventh
century AD. The foun…