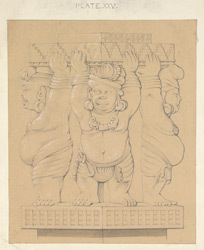 Pencil drawing by Frederick Charles Maisey, dated
1847-1854, of the figures of yakshas or dwarfs carved on the
capital on the south end of the lower architrave of the West
gateway of the Stupa of Sanchi.This is a working drawing for the
final plate XXV published in Maisey's 'Sanchi and its Remains' of
1892. Lieutenant Maisey spent the cold seasons of 1849-50 and
1850-51 at Sanchi to prepare an ill…