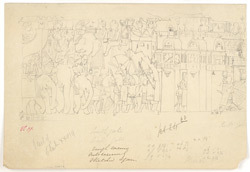 Pencil drawing by Frederick Charles Maisey, dated
1847-1854, of the left hand section of the scene of the War over
the Buddha's relic at the Stupa of Sanchi. This scene is carved on
the middle section of the bottom architrave on the back of the
South gateway. This is a working drawing for part of the final
plate published in Maisey's 'Sanchi and its Remains' of 1892.
Lieutenant Maisey spent the co…