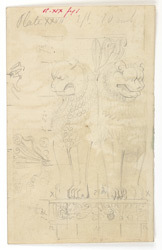 Pencil drawing of the capital supporting the east
end of the lower architrave of the south gateway of the stupa of
Sanchi, by Frederick Charles Maisey, dated 1847-1854.The four
magnificent gateways or toranas of the stupa (a Buddhist monument
consisting of a domed-shaped mound often containing sacred relics)
consist of square posts, each crowned with a set of four lions,
elephants or pot-bellied d…