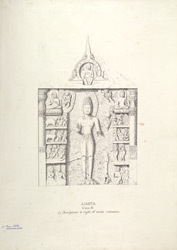 Illustration of a sculpture located right of the
main entrance at Cave IV at Ajanta from James Burgess' 'Original
Drawings from the Buddhist Rock Temples at Ajanta.' The Buddhist
cave temples of Ajanta were excavated into a horse-shoe shaped
cliff overlooking the Waghora River in the 2nd?1st Century BC. Cave
IV dates from a later phase of excavations from the late 5th
Century and is the largest mo…