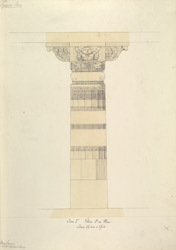 Illustration of a pillar at Cave I at Ajanta in
Maharashtra, from James Burgess' 'Original Drawings from the
Buddhist Rock Temples at Ajanta.' The Buddhist cave temples of
Ajanta were excavated into a horse-shoe shaped cliff overlooking
the Waghora River in the 2nd ? 1st century BC and later in the 5th
century AD, a period of time which coincides with the Hinayana and
Mahayana phases of Buddhist a…