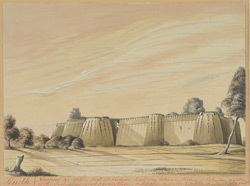 Water-colour painting of the fort at Nurpur, half
way between Kotri and Sehwan in Sind, Pakistan by Henry Francis
Ainslie (c.1805-1879) in January 1852. Inscribed on the front of
the mount in red ink is: 'Sindh. Noorpoor-ke-gote, Fort of
Noorpoor, halfway between Kotree & Sehwan right bank of the
Indus, in good preservation, built of mud, walls 12 feet thick,
Jany 1852. HFA.'