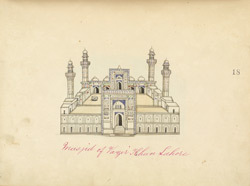 Watercolour drawing of the Mosque of Wazir Khan
in Lahore, Pakistan by an anonymous artist working in the Punjab
style, c. 1860. The image is inscribed: 'Masjid of Vazir Khan
Lahore.'The mosque depicted here was built in 1634 by Hakim Ilmud
Din, popularly known as Wazir Khan and Viceroy of Punjab during the
reign of the Mughal Emperor Shah Jahan. This period is
characterised by great architectural…