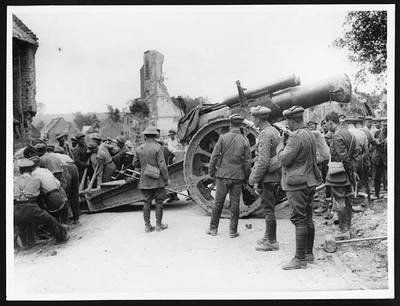 Moving of a Howitzer gun, France. The village is visible in the background. In front of the Howitzer half of the very large crowd are milling around. Behind the gun the rest of the troops are attempting to lever the gun into place. [Original reads: 'OFFICIAL PHOTOGRAPH TAKEN ON THE BRITISH WESTERN FRONT IN FRANCE. Moving heavy howitzer into a new position during the advance.'].