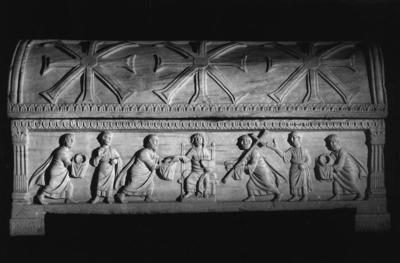 Sarcophagus of the twelve apostles, on the front is depicted the scene of the Traditio Legis with Christ giving the scroll to Saint Paul, on the right Saint Peter approaches Christ with the keys and the cross. There are also four other apostles, while on each side of the sarcophagus three other apostles are represented. The lid shows three eight-pointed crosses.