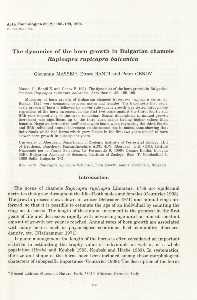 Measures of horn growth of Bulgarian chamois Rupicapra rupicapra balcanica Bolkay, 1925 were compared between males and females. The hypothesis that rapid early growth of horn is followed by slower subsequent growth was tested throught the regression of the horn increment in the first two years against the third, fourth and fifth year respectively in the same individual.