What is the real palaeo diet, and who invented bread?

What archaeology tells us about eating and drinking in the past 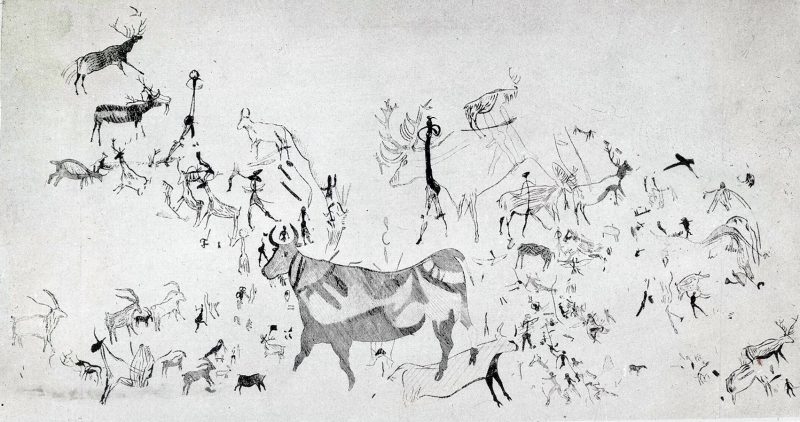 Archaeology can give great insight into what processes have made us the humans we are today. Seemingly small things have hugely influenced our contemporary lives, and maybe the most important one is the invention of cooking. Richard Wrangham, professor of biological anthropology, in his book, Catching Fire: How Cooking Made Us Human, describes how cooking reduced the caloric cost of digestion and increased the efficiency of food consumption. According to Wrangham, homo erectus (who lived between about 1.89 million and 143,000 years ago), evolved to develop a smaller, more efficient digestive tract that freed up the energy to enable brain growth.[efn_note]Wrangham, R. (2009). Catching Fire: How Cooking Made Us Human. London.[/efn_note] This was thanks to Homo Erectus being able to cook their food, setting the stage for modern humans. But what, and how, did these palaeolithic humans cook?

Who invented bread and pancakes?

Amaia Arranz Otaegui, a postdoctoral researcher from University of Copenhagen and her colleagues have found archaeobotanical evidence revealing the origins of bread 14,400 years ago in north-eastern Jordan. That's about 4,000 years before agriculture![efn_note]Arranz-Otaegui, A., Gonzalez Carretero, L., Ramsey, M.N., Fuller, D. Q., Richter, T. (2018). Archaeobotanical evidence reveals the origins of bread 14,400 years ago in northeastern Jordan. Proceedings of the National Academy of Sciences, 115 (31), 7925-7930. DOI: 10.1073/pnas.1801071115.[/efn_note] "Our work shows that bread was not a product of settled, complex societies but of Paleolithic hunter-gatherer society," said Otaegui for The Washington Post. One of Otaegui’s articles poses that “Interdisciplinary analysis indicates the use of some of the “founder crops” of southwest Asian agriculture (like wild einkorn) and root foods (e.g. club-rush tubers) to produce flat bread-like products.”

The first known flatbread comes from Shubayqa 1, a Natufian hunter-gatherer site. Through cultural diffusion, and over time, these first flatbreads have evolved into the pizzas, pita, puri, pane carasau, chapati and tortillas we know and love today.

How humans have evolved to eat meat is another area of discussion and debate among archaeologists. Humans might have resorted to meat eating as a necessary adaptation to their changing environment, but it might also have been a milestone change that allowed for quick development of the human brain. Katherine Milton of the University of California says that “early humans were forced into this dietary change because the forests of Africa were receding and these hominids simply couldn't get enough plant matter to stay alive”.[efn_note]Milton, K. (1999). A hypothesis to explain the role of meat‐eating in human evolution. Evolutionary Anthropology, 8, 11-21. Doi:10.1002/(SICI)1520-6505(1999)8:1<11::AID-EVAN6>3.0.CO;2-M.[/efn_note] Meredith F. Small from Cornell University adds that “for these few million years, humans apparently stuffed themselves with raw meat. And then somewhere, somehow, somebody offered it up cooked.”[efn_note]Small, M. F. (2008). Outdoor BBQ: A 700,000-year-old Ritual. Live Science. https://www.livescience.com/2650-outdoor-bbq-700-000-year-ritual.html [/efn_note]

So what about the palaeo diet?

The palaeo diet is a diet based on the idea that your body benefits most from the same foods that palaeolithic humans ate. It, among others, cuts starchy vegetables, cereal grains, and legumes in favour of unprocessed meat, nuts and seeds, and a lot of fruits and veggies.[efn_note]Cordain, L. (2018). Ten questions about the Paleo Diet. The Paleo Diet. https://thepaleodiet.com/temp-title-dr-cordain-interview/.[/efn_note] But archaeological research shows that maybe flatbreads and other grain products might have been a bigger part of the palaeolithic diet after all, and that meat might have played a smaller role than first thought in our ancestors’ daily meals. Ann Gibbons at National Geographic mentions the high level of plant-based food in hunter-gatherers societies: “It’s true that hunter-gatherers around the world crave meat more than any other food and usually get around 30 percent of their annual calories from animals. But most also endure lean times when they eat less than a handful of meat each week.”[efn_note]Gibbons, A. (2014). The Evolution of Diet. National Geographic. https://www.nationalgeographic.com/foodfeatures/evolution-of-diet/ [/efn_note] The palaeo diet might not be so palaeo after all, as archaeological research keeps unearthing new evidence and formulating new hypotheses about the evolution of our species. This doesn’t necessarily mean that the palaeo diet isn’t healthy, but it does show interesting insights into the constantly changing landscape of archaeology.

By Rimvydas Laužikas,
University of Vilnius