A story of migration

Each of the films of Krzysztof Kieślowski’s Three Colours trilogy explores a topic from the French Revolution motto Liberté, Égalité, Fraternité.

Three Colours: White addresses equality through the fate of Karol Karol (Zbigniew Zamachowski), the movie’s main character, a Polish man living in France. The film plays with the notion of emigration and return, and questions how equal we are occupying those positions. 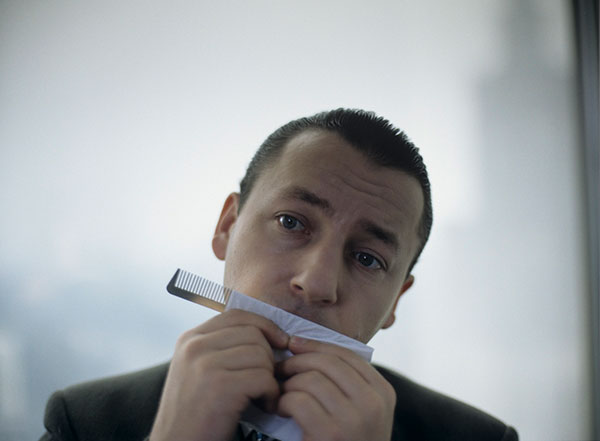 In the film’s opening scenes, Karol is seen in divorce hearings asking the judge: "where is equality here?!” As his marriage ends, he is left only with an old suitcase and his hairdressing diplomas. This small, inconspicuous man in a raincoat is lost in the enormous interiors of the Paris Palace of Justice.

The film symbolically shows Karol’s descent through his journey downwards into the underground Paris metro station, where he earns some extra money playing a comb. He sits on a concrete floor, literally and metaphorically lower than all the people passing by.

There, he meets another Polish man, Mikołaj, and together they hatch a plan for Karol to return to Poland hidden in an old suitcase.

Back in Warsaw, Karol transforms himself from a hairdresser into a businessman and capitalist. He orders a construction crew to completely rebuild a wall around his property.

He undergoes a drastic metamorphosis only after returning. His dirty, old coat turns into an elegant, expensive suit. In France, with no money, a French bank clerk cuts his card when he wants to withdraw money. But, in Poland, Karol enters a bank with a bag filled with dollars. In Paris, Karol is not shown at work, whereas, in Warsaw, after his return, he is a sought-after master hairdresser who woman queue for.

Later, Karol rents an office in a modern tower block on a very high floor. Karol and Mikolaj stand together at a window and comment, “Nice... Warsaw under us”. His fortunes have swung a long way from begging on the Paris metro. Some time ago he did had almost nothing, now he has almost everything.

The film questions, however, how far one can come. After saying “Warsaw under us” Mikołaj quietly hums the melody of a Polish song, which Karol then plays on the comb, repeating what he did when they met for the first time in the metro. Even though now they are businessmen, how much of the confused emigrants is still inside?

The film plays with the contrasting meanings between France and Poland, up and down, bad and good. Kieślowski wrote in his autobiography on Kieślowski: “At the beginning, Karol is humiliated, tramped into the ground… Everything he ever had is taken away from him and his love is rejected. He wants to show that he is not just as low as he’s fallen, he’s not just on a level with everybody else, but that he’s higher, that he’s better… Therefore he becomes more equal.”