Each month, we invite a guest to write about a musical subject and highlight some of the material on Europeana Music.

For the month of November, the Bibliothèque nationale de France (BnF – National Library of France) presents some sounds of the 1931 French colonial exhibition and makes you travel through time and space with music from Bali, India, Laos, Vietnam, Cambodia and Madagascar.

Listen to "Sabat-sabing" played by the musicians below. You can also read more details about this recording on Europeana.

When its gates opened for 6 months in May 1931, the Paris colonial Exhibition was intended to display what was then considered as the positive impact of colonisation, in the political, economic and social areas. In 1931, the Musée de la Parole et du Geste (founded in 1928, following the 1911-founded Archives de la Parole) was the only institution in France collecting and preserving sound archives. 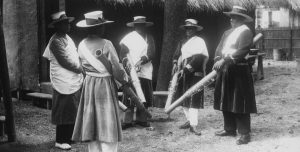 The idea was born to record a sound anthology benefiting from the fact that a lot of people from the vast French colonies were in Paris for the occasion.

The Anthology would gather tales, songs and music in various languages; taking advantage of the fact that staging the colonies to the public was the promoters’ idea for the Exhibition. However, the Anthology was more grounded in sound and language studies, reflecting also a new interest in world music in 1930s France. The Musée de la Parole et du Geste recorded 176 78rpm records of songs, speeches and music during this Exhibition. As it was closely linked to the Paris University, it was a serious scientific undertaking.

Still, there were two underlying motives not so clearly expressed:

In the end, this anthology gives a kind of topography, perhaps of the colonies, but especially of how the West were seeing them: when we listen to the recordings, we hear different types of performers and very different types of repertoires, which reflect the greater or lesser degree of consideration given to those populations.

Among the many countries present at this exhibition, Asia was strongly represented with Bali, India, Laos, Vietnam and Cambodia. Two remarks can be made about their music:

Africa was present too. Madagascar allows us to discover some popular music through choir music and valiha, a local zither made of bamboo. Here, it was performed by a professional and well-known orchestra – Mpilalao - that also made recordings for Pathé, Columbia, Gramophone, etc.

In all, there are 21 records with music from Madagascar, making it the best represented culture in the Anthology. Let’s not wait anymore before we hear those recordings of a bygone world.