This blog post was originally released on the Europeana Sounds blog.

After a nice journey through Europeana Sounds items related to goats , let's continue our series on animals and sounds with some fascinating resources held by the Irish Traditional Music Archive (ITMA).

In his insightful publication A handbook of Irish music (Dublin, 1928) Richard Henebry (1863–1916) draws a comparison between innate animal sounds and aspects of melodic structure in Irish traditional music. In particular, he refers to the descending nature of birdsong such as a warbler, a crowing cock or the lonesome howl of a dog, in what he describes as ‘the pleasing pain of sadness’ shared by animal and human alike. 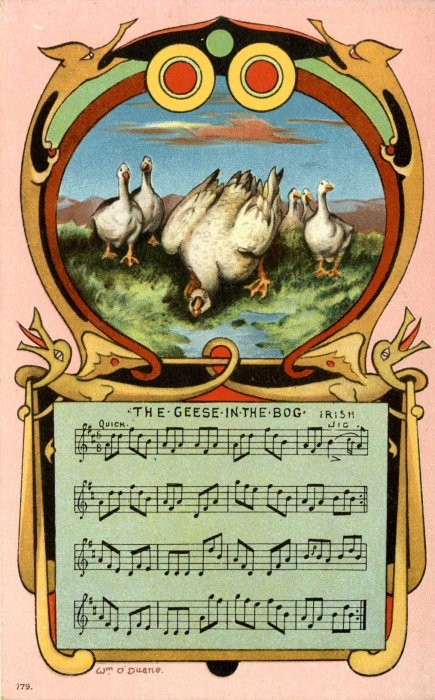 A cursory glance at the vast resources held by the ITMA is sufficient to uncover a wealth of animal-related tune and song titles. As a predominantly agrarian society until the mid-20th century, awareness of nature and the environment was crucial to survival. It is therefore not surprising that a large portion of music and song titles relate to various animals.

Titles can be a simple case of ownership, for example ‘Casey’s pig’, or ‘O’Donnell’s grey mare’. Others create interesting imagery such as: ‘The ewe with the crooked horn’; ‘; ‘The geese in the bog’, or ‘The cat that kittled in Jamie’s wig’ the latter having migrated to Ireland. In all aforementioned examples the tune title is a completely separate entity to the melody.

Another more interesting layer is added when the tune title and melody are closely connected. In his CD The quiet glen (Clare, 1998), the fiddler Tommy Peoples includes two of his own compositions, ‘The mouse in the attic’ and ‘The fat cat’. The melody of each tune reflects both the pattering feet of the mouse in the attic and the lazy ‘meeooww’ of a satisfied cat.

The influence of birds and birdsong in traditional music is also evident throughout Ireland. The cuckoo, which appears in parts of rural areas for a short period in late spring and early summer, produces a C sharp / A in its distinctive song. Fiddlers from past generations welcomed this ‘A’ note as a tuning aid, albeit for a limited time of the year. ‘The morning thrush’, composed by James Ennis, father of renowned uilleann piper Séamus Ennis (1919–1982), is a particularly popular reel among pipers. One bird that has proved highly influential is the blackbird, and there are several examples of both the air, song and set dance at ITMA. 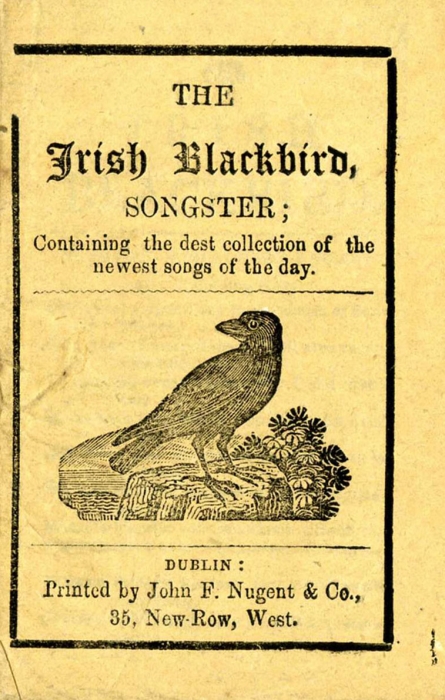 he song tradition also follows a similar pattern, with humourous songs such as: ‘Denis Kelly’s donkey’; ‘Nell Flaherty’s drake’, and ‘The royal rats of Carn’, examples of which can be found in the ITMA Inishowen Song Project.

A popular song in the Irish language tradition is ‘An bonnán buí’ (‘The yellow bittern’), written by poet Cathal Buí Mac Giolla Ghunna (c. 1680–1756) as a lament for a bittern that died of thirst. This apparent lament is however regarded as a tongue-in-cheek reference to the writer’s own everlasting thirst for strong liquor.

‘Seán Ó Duibhir a ghleanna’ is a song referring to the advancing plantations and dispossession of lands by Anglo-Scots in Ireland in the 17th century. This version collected from the singing of Gerry O’Hanlon (1946-2012) from Co. Armagh, is abundant with colourful imagery and a powerful soundscape of nature and animal life. The opening section describes a serene summer morning disrupted by an advancing foxhunt.

How oft at sunny morning, sunshine all adorning, I have heard the dawn give warning, with birds mellow call, Badgers flee before us, woodcocks startle o’er us, Guns in ringing chorus, amid the echoes all, The fox runs high and higher, horsemen shouting nigh her, The maid in mourning, by her geese that are all gone.

Following the same theme, descriptive pieces in the tradition can reflect the clamorous sounds of a fox or hare hunt. A good example of this is ‘The hunt of the hound and the hare’, where the musician mimics each phase of the quest with a tune echoing the hunt’s progress until the hare is eventually pronounced dead. Similar examples include the jig ‘Hunting the hare’, and the song ‘Reynard the fox’, both collected and published by P.W. Joyce (1827–1914).

Ireland’s economy has moved beyond agricultural dependence, and while the young 21st century singer or musician is tech savvy and increasingly urbanised, a large percentage of commercially released material continues to include animal-related titles or themes. A recent CD donation from Australia, The freewheeler (Melbourne, 2015) features flute player Dougal Adams playing ‘Murphy’s greyhound’ and ‘The sheep in the boat’. Likewise from the song tradition, Dublin singer Luke Cheevers’ recent CD It’s just me saggin’ shelf (Dublin, 2015) includes ‘Miss Mousie’s Ball’. In this children’s song Miss Mousie hosts a ball inviting: Veronica squirrel, who brushes her hair; Miss Frog who puts on her best shoes, and Mr Hare, who receives a letter of invitation. Miss Mousie succeeds in getting Mr Fox arrested before he can gate-crash the dance!

You can explore more animal-related tunes, songs and dances from the ITMA collection available on Europeana. Tally-ho!