In the 19th century, the forest industry in northern Europe started to grow steadily. Log driving - a cheap and fast way to transport logs - was critical in meeting the growing demand throughout Europe for sawn wood and square-cut timber. 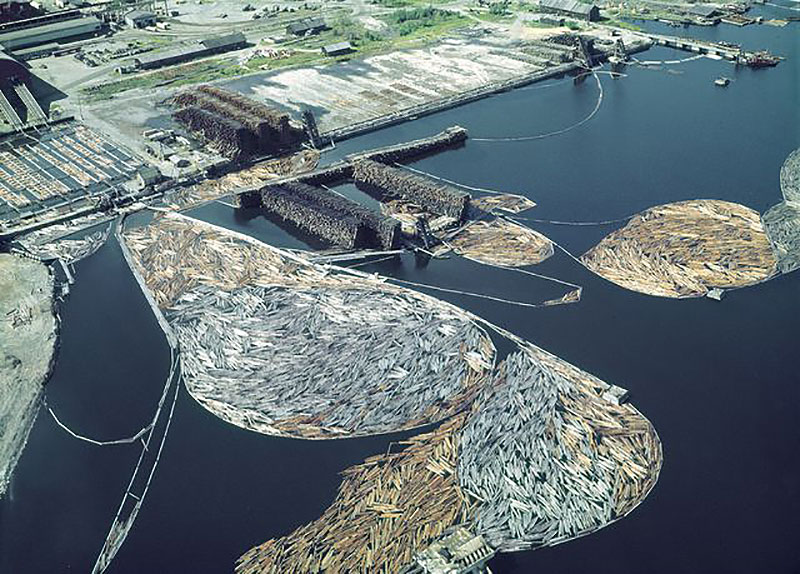 Both Sweden and Finland have dense networks of streams and creeks of different sizes. At the time, these were a more efficient solution for transporting logs than railways or roads. Log floating or driving in Sweden (timmerflottning in Swedish) had already begun in the 16th century, and in Finland in the 17th century (tukinuitto in Finnish).

In Finland, long rivers such as Oulujoki, Iijoki and Kemijoki were used for log driving. The total length of timber-floating routes in Finland was 40,000km, of which 20,000 km were riverpaths. Sweden’s popular waterways included rivers such as Klarälven, Dalälven and Vindelälven.

The climate in both countries was perfect for log floating. The trees were cut during winter, with spring floods helping the log floating process.

Small streams near the forest were usually the starting point of log driving.

When logs floated apart, log drivers would direct and control them in curves of the stream with pike poles. Reaching the broader streams and rivers, the logs would be bundled together in timber rafts controlled from the banks of the river or from boats. On lakes, the timber rafts were pulled with tugboats.

Log driving was such a crucial part of the industry that both Sweden and Finland had special laws, allowing the use of streams for log driving. The Even today the Finnish water act states that ‘unless otherwise provided by law, everyone has the right, without inflicting unnecessary damage, harm or disturbance, to... float timber in the water body…’

In the 20th century, log drivers were romanticised figures. Their work was dangerous, even deadly sometimes, and they were seen as masculine, free souls, who were easy-going and popular among women.

In both Finland and Sweden, log driving inspired art, literature, drama and music.

During the Second World War, labour shortages affected the log driving industry, as men were recruited to armies. At that time, women, young boys and older men worked as log drivers instead. Before the war, around 45,000 people were involved in log driving, but in the war period this number decreased to 30,000−35,000.

After the 1950s, the industry started to fade, as the forest roads and logging trucks improved.

Increasing demand for electricity was also a reason for the decline of the log floating industry, as it was not compatible with the need for hydro-electric power. Special legal privileges for log driving were removed in Sweden in 1983. The last float in southern Sweden was in the 1960s, with the floating era in the rest of the country ending completely with the last log drive in the Klarälven river in 1991.

Today, you can still find some timber rafts floated in Finland, but these days logs are usually transported using railways or logging trucks.

Even though log driving itself is not common anymore, people still value the skills and the tradition of log driving.

Did you or your family work in the log driving or timber inudstry in Sweden, Finland or elsewhere? Share your story and help us tell the story of Europe through our working lives in the past and the present.

This blog post is part of the Europeana Common Culture project**, which explores varied aspects of our shared cultural heritage across Europe.
**