As you may know, one of Europeana's projects is collecting personal stories and memories from World War One. Europeana 1914-1918 is a crowd-sourced project.

That means that it is you, its users, the members of the public, who make it what it is. It's your contributions, your stories, your time and effort. So far, with your help, we've collected over 2,500 stories and 40,000 digital files to illustrate them. A huge thank you from all of us.

One contributor, however, has gone even further than simply submitting his family stories to the archive. Christian Reinboth from Germany has blogged about it and offered to set up a 'Europeana Day' in his home town to help others to add their stories to the collection.

Looking through the family attics, Christian found not only postcards and letters from him but also drawings, certificates and other military documents as well as handwritten field diaries from Friedrich's 7-year stint in a Hussarian regiment. 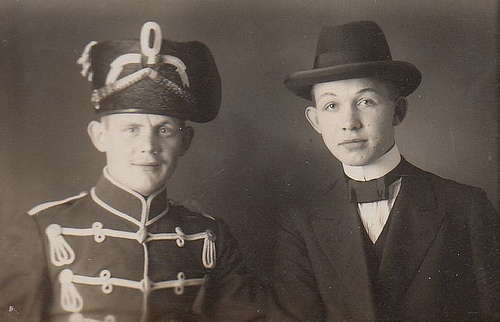 A photograph of the two brothers Friedrich (left) and Carl Reinboth (right), taken some time in the year of 1914. The older brother Friedrich is dressed in the parade uniform of the 14. Hussarian Regiment 'Friedrich II von Hessen-Homburg', in which he served during World War One.

So how did Christian find out about the Europeana 1914-1918 project?

He says, 'Over the last few years, I have done volunteer work for the Museumsverband Sachsen-Anhalt, which is currently organising a touring exhibition about the First World War, which will be shown in many museums in Saxony-Anhalt from 2014 to 2018. Additionally, many exhibits related to the First World War are being digitised by the museums for the digitisation project museum-digital, which, in turn, is connected to Europeana via the ATHENA project. It was in one of the digitisation workshops organised by the association in 2011, that I first heard about the Europeana 1914-1918 project.'

'When I subsequently browsed the 1914-1918 website, I read the call for participation and decided to get involved by digitising documents, photos and field postcards from the inheritance of my great-great-uncle Friedrich Reinboth, who served in the 14. Hussarian Regiment Friedrich II von Hessen-Homburg during World War One and who died on March 21st 1918 during an encounter in the Ukraine.

So far, I have been able to contribute 13 exhibits to the project.

Digitising these has also inspired me to take up the task of transcribing Friedrich's hand-written war diary - as of today, I have transcribed all entries from July of 1914 ('The enthusiasm for the upcoming war is rising') to August of 1915.' 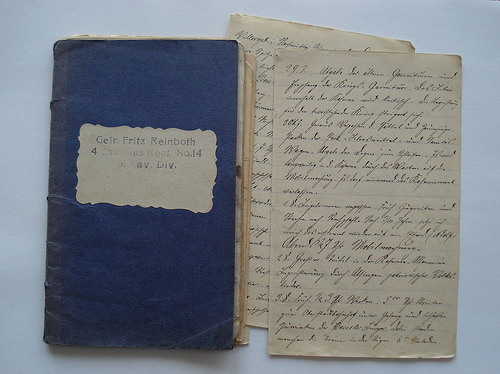 War diary of Friedrich Reinboth. The pictured diary is the first of three conserved war diaries covering the time between 1914 and 1917.

Christian is now encouraging others in the Walkenried area of Germany (an area with 4,600 residents in the Harz mountains) to contribute too. Christian offers to set up scanners, digital cameras and internet stations at the local museum in order to help others with the technical side of contributing. He has even put a short video together and posted it on YouTube.

Christian says, 'Since I have had the opportunity to explore our own family archive in search of documents, letters and diaries written during World War One, I have becore more and more convinced that there are many undiscovered historical gems and untold family stories out there, that would certainly deserve to be preserved in the Europeana archives.' 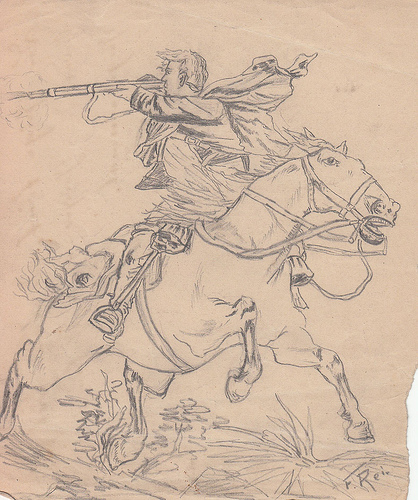 A Hussarian during a firefight drawn by Friedrich Reinboth some time between 1911 and 1916.

In his blog, Christian, who is a computer scientist by day, also picks out some stories from the Europeana 1914-1918 archive that he finds most interesting. He recommends a diary of a British nurse with signatures of the wounded people she cared for, this 1914 letter giving a Tyrolean infantryman permission to stay out until 10 o'clock and this postcard from a Prague hospital from the year 1916.

Christian ends his blog with a sentiment that I'm sure we all share: 'So let's work together to ensure that the memories remain and that we collect the very personal family stories of this destructive and cruel war for the benefit of future generations.'