Italian soldiers who fought and died in the Great War

Stories and testimonies from World War One

Armando Montanari was born in 1894 and enlisted in the 81st Infantry Regiment. He was one of the 16 volunteers involved in the Italian offensive against the Austrian stronghold of Sasso di Stria, which occurred on 17-18 October 1915. He was wounded in the shoulder and was awarded the Medal of Valour alongside his surviving companions. The Lieutenant Commander of the patrol was Mario Fusetti who died in action and was awarded the Gold Medal.

The documents accompanying this story (shown in photographs below and in full on the Europeana 1914-1918 website) are part of one single precious album put together by Montanari himself. The album contains photographs, drawings with handwritten captions, documents and newspaper clippings dating from Montanari's imprisonment in the Austrian prison camp at Mauthausen to the news of his medal.

Among all memories included in the album, the letter that Mario Fusetti wrote the day before the action (October 16) and sent to his relatives is to be considered particularly significant. In the letter Fusetti describes the war from the beginning up until the battle with the Austrian enemy, and he asks his family to communicate his thoughts to the colonel and to his brothers-in-arms. All of the documents have been contributed by Mr. Matteo Iacobini. 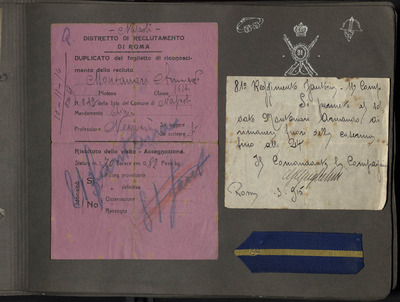 Memory of the Forcella Giralba This story is told by Mrs. Sandra Tuzi, the wife of a soldier's nephew, whose experiences this object illustrates. The soldier, Officer Ivan Coen was born in Rovigo and enlisted in the 32nd Regiment. The story testifies to Coen's experiences on the Forcella della Giralba pass in the Dolomite mountains, where both his feet got frozen.

The object (shown in the photograph below and in full on Europeana website) was created by his soldiers. It was engraved with a nail and depicts the mountain landscape, edelweiss flowers and the inscription '32° Fotoelettrica'.

The White War on the Adamello These 32 photos form a ´unique´ album of images relating to the White War on the Adamello mountain in the Italian Alps (shown in photographs below and in full on the Europeana 1914-1918 website). It is a photographic record of a soldier at the front and each photo has handwritten notes on the reverse. The album includes anecdotes about the soldiers’ daily lives, pictures of weapons and battles, route plans and military strategies.

The annotations in the soldier’s own handwriting on some of the photos describe the First World War in Val Camonica, and in Edolo and Vezza d'Oglio in particular. In fact, in Edolo there were several military commands that directed operations on the front near the Adamello, the so-called 'White War'. Vezza d'Oglio, on the other hand, was the terminus of a small railway line which, starting from the station at Edolo, carried supplies and troops close to the front.

The railway climbed to the vast and difficult terrain of the Adamello frontline whose trenches and communication trenches ran from the North-West side of the mountain range over Vezza d’Oglio and reached as far as the border between Italy and Austria. Vezza d’Oglio was also a regimental command post and on several occasions ceremonies were held in the town square to award medals to the Alpine troops who had distinguished themselves in battle. 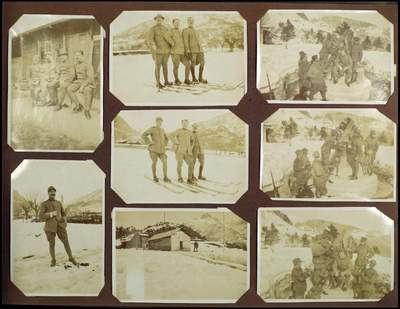 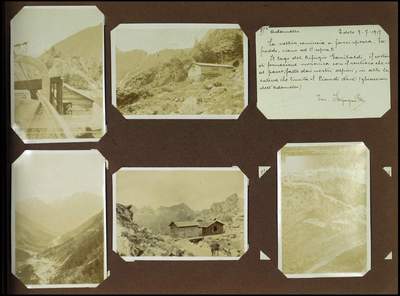 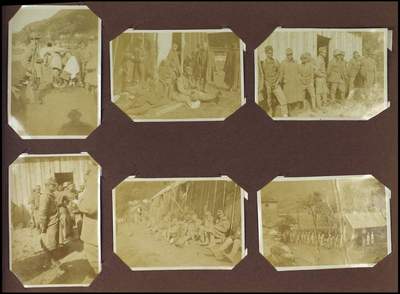