Happy New Year from Europeana! What…  you didn’t realize it was already the New Year? When most people think of September, thoughts of crisp autumn days and children returning to school come to mind. However, for Jews around the world, the beginning of autumn is also the time of the Jewish New Year (or Rosh Hashanna in Hebrew) – this year celebrated from September 18-20.

Jews celebrate the new year in many ways, both at home and in the synagogue, where a special prayer service of thanksgiving is held. The shofar, a biblical instrument made from an animal horn (usually of a ram), is blown during the services to announce the coming of the new year and is meant to represent a spiritual awakening. Giving charity to people in need and buying new clothing is also often part of how Jews observe the holiday. 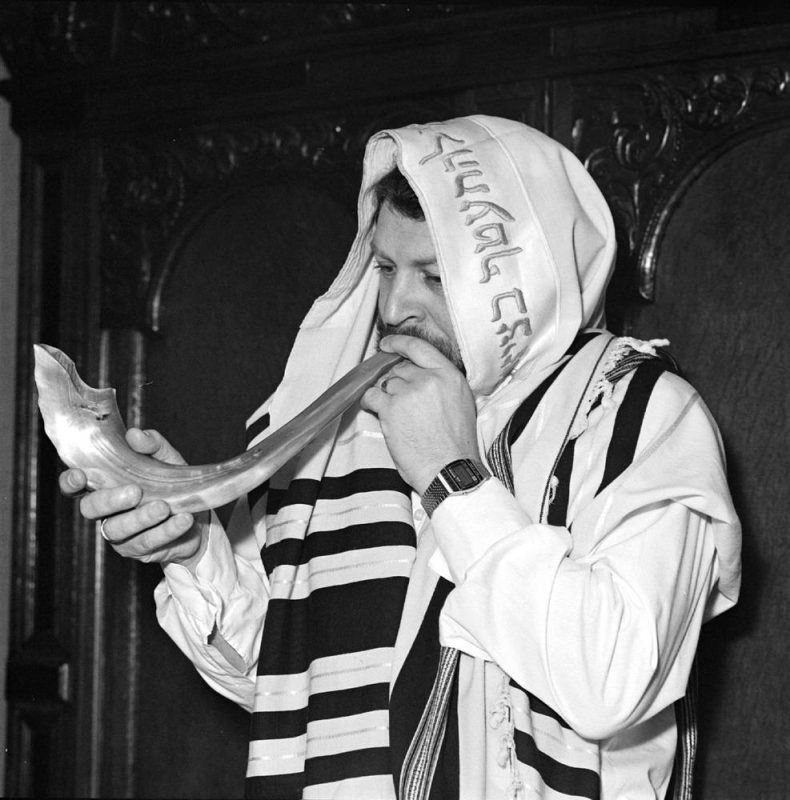 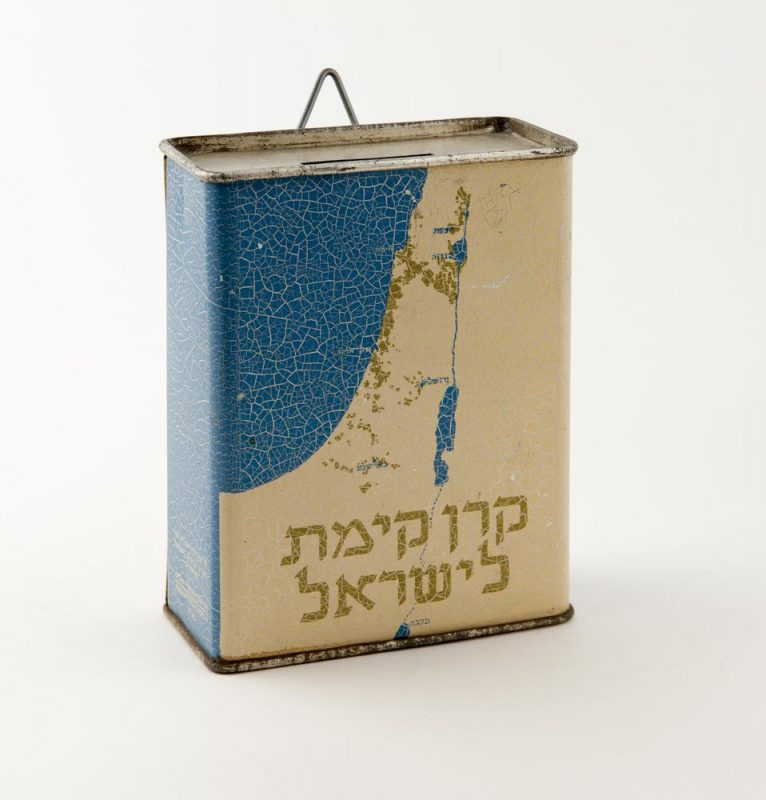 In the home, the Jewish New Year is a time for families to come together for a festive meal. Special foods are eaten to symbolize the hope for a “sweet new year”, including fruits from the autumn harvest. One specific tradition is to dip apples in honey. 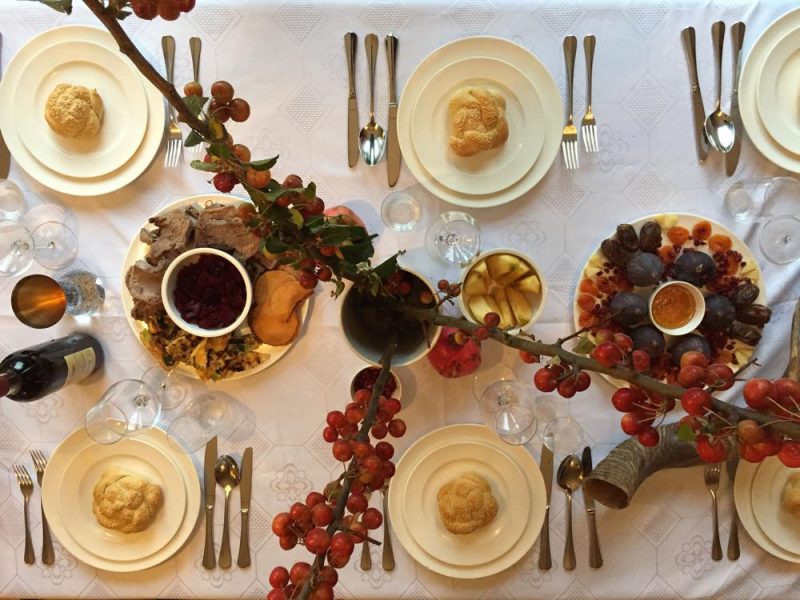 Another popular activity is sending greeting cards to family and friends, particularly those who one will not see during the holiday. Handwritten Jewish New Year cards originated in Germany in the 1400s. In the 20th century, their popularity took off at the same time as Christmas, Easter, and Valentine’s day cards due to inexpensive colour printing and cheap postal rates. The selection of Jewish New Year’s cards below is indicative of the diversity of Jewish life throughout the 20th century, shifting artistic influences, linguistic diversity and the political events which marked the Jewish community in the modern era.

The most popular early Jewish New Year cards were printed and designed by Haim Goldberg in Warsaw between 1920-40. His cards depict different aspects of Jewish life in Eastern Europe, sometimes of a religious nature and other times humorous scenes accompanied by poems in Yiddish. 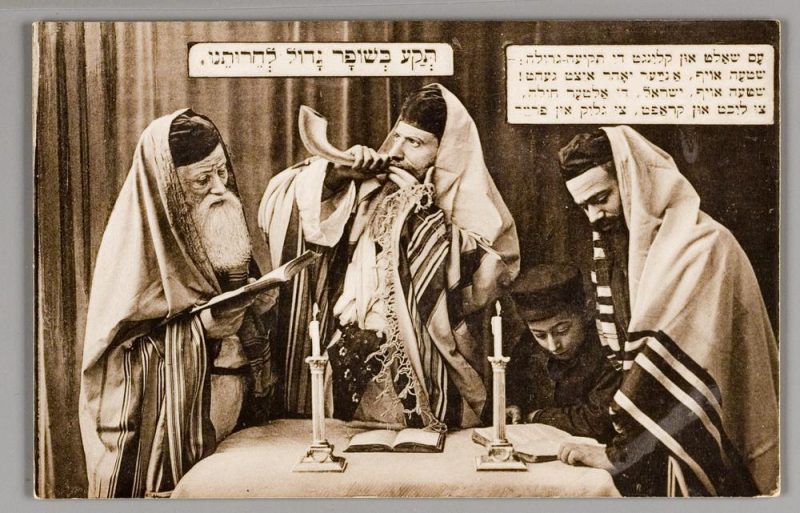 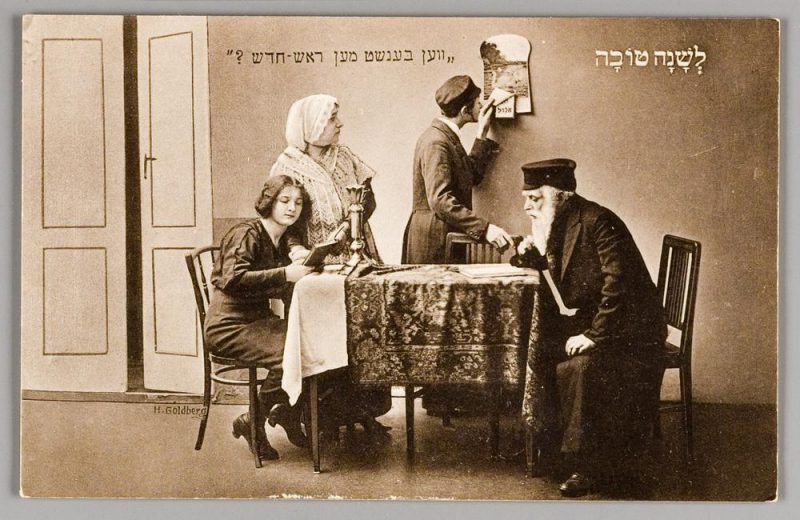 The two cards below touch upon the centrality of Zionism and the creation of the modern State of Israel within the 20thcentury Jewish experience.  The card from the early 20th century on the left shows a man and woman holding Zionist flags, whereas the card from the 1970s was made to promote Israel’s national airline ELAL. 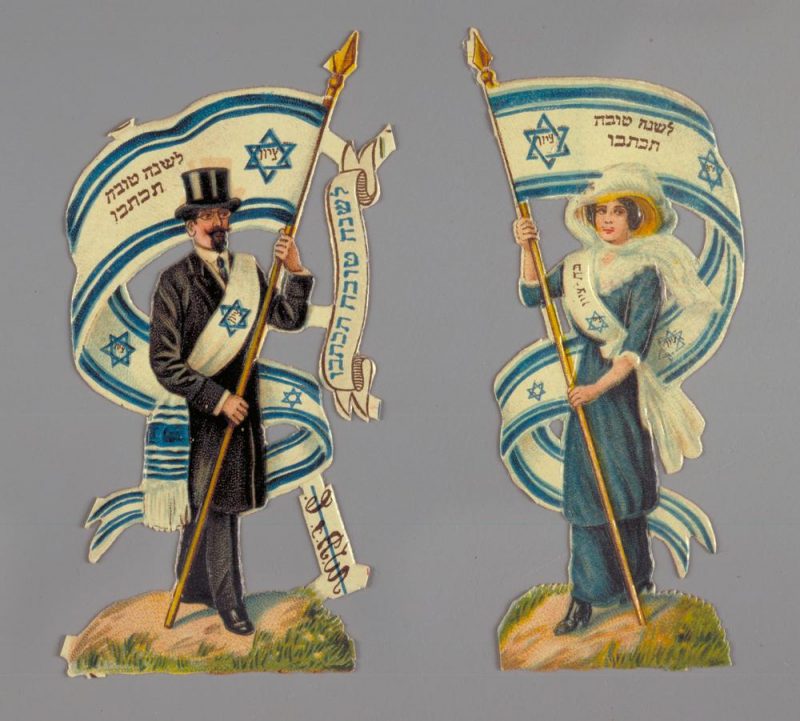 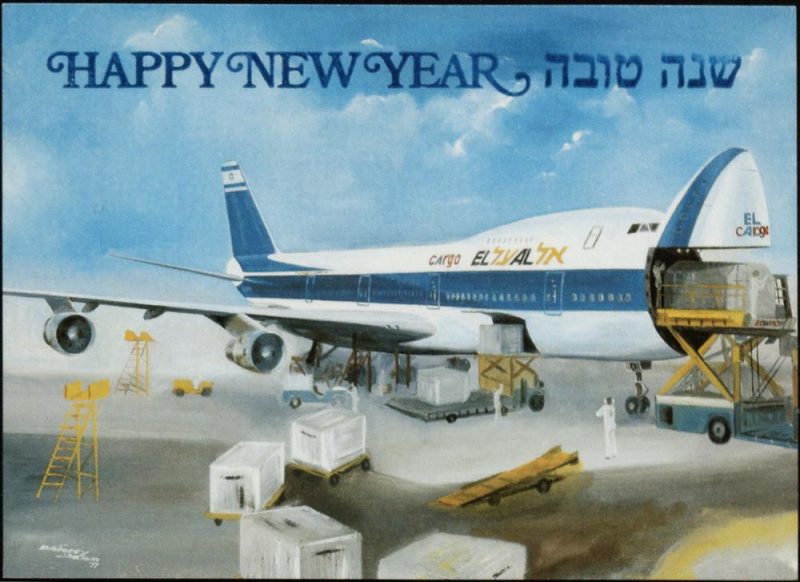 The card below was printed in Germany, yet surprisingly does not contain any German. Instead, there is a mixture of English, Hebrew and Yiddish. Perhaps it was sent to family members who had emigrated to the United States? 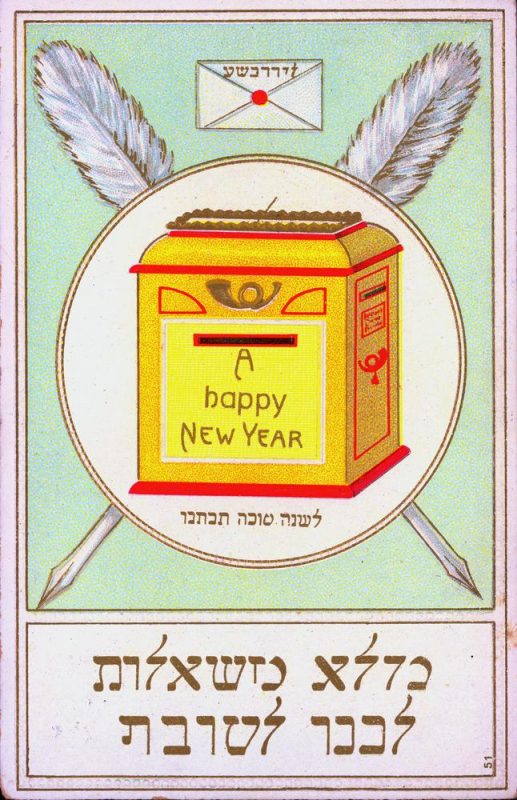 The rare hand-drawn card below was made in the final year of World War II. The imagery is striking, in that it doesn’t include any traditional holiday themes or Hebrew. Instead, it focuses on the hope for liberation with patriotic Dutch motifs, although the wording is in English and French. 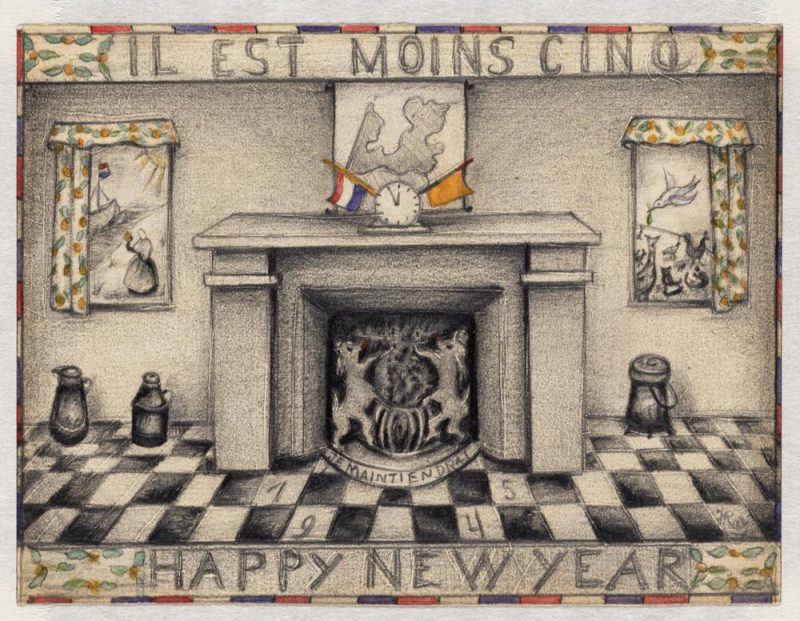 More recently, Jewish artists have been inspired to design stylized holiday-specific cards. Below is a modern and whimsical take on a New Year’s card by Dutch artist Eli Content: a block print in Hebrew with a fish on a Chinese newspaper. Perhaps it could also be used for Chinese New Year? 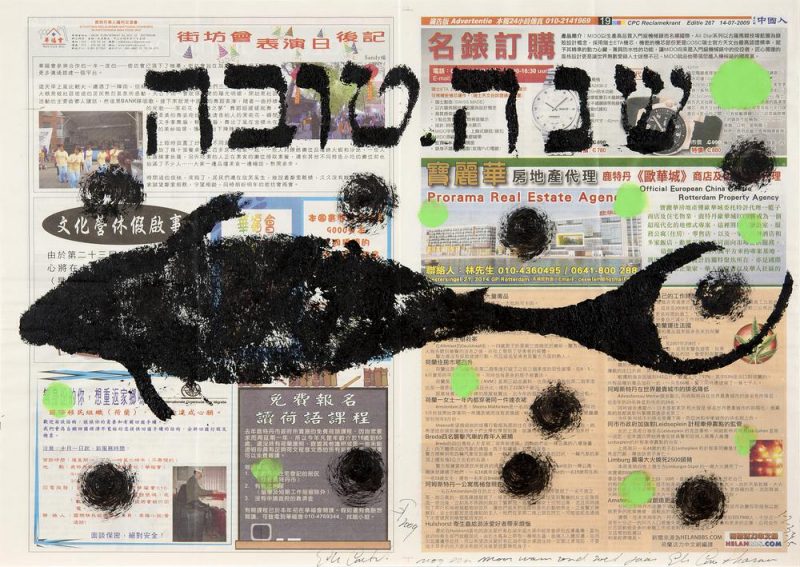 Throughout the 20th century, Jewish communities began to open up toward outsiders, as seen in the picture below of the Dutch royal family visiting the Spanish-Portuguese synagogue of Amsterdam in September 1904. 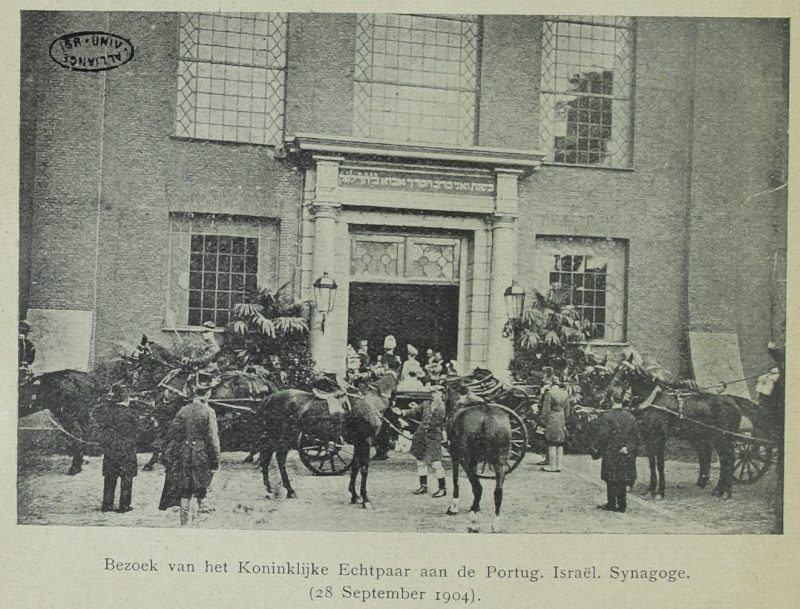 With recent technological advances, the Jewish community has also been able to open itself up virtually to non-Jews interested in learning about Judaism. These videos about Jewish New Year  are a good example; one was made for the French television show “La Source de Vie” in 1990, while the other aired on Slovenian national television in 1998. Both explain the holiday and show Jewish communities celebrating the new year.

Wishing everyone the traditional greeting of “L’Shana Tova,” which is Hebrew for “a Good Year.”