The Romanian Revolution, in December 1989, violently brought an end of 42 years of Communist rule in Romania. In this blog, Cristina Roiu of The Romanian Academy Library remembers the Romanian revolution through experiences and memories shared at a number

The Romanian Revolution, in December 1989, was a time of civil unrest that led to the trial and execution of Communist Party leader Nicolae Ceaușescu and his wife Elena, and the end of 42 years of Communist rule in Romania.

Revolutions occured in several countries in central and Eastern Europe in 1989. The Romanian revolution was the last of these, and the only one that violently overthrew a government and executed its leader. 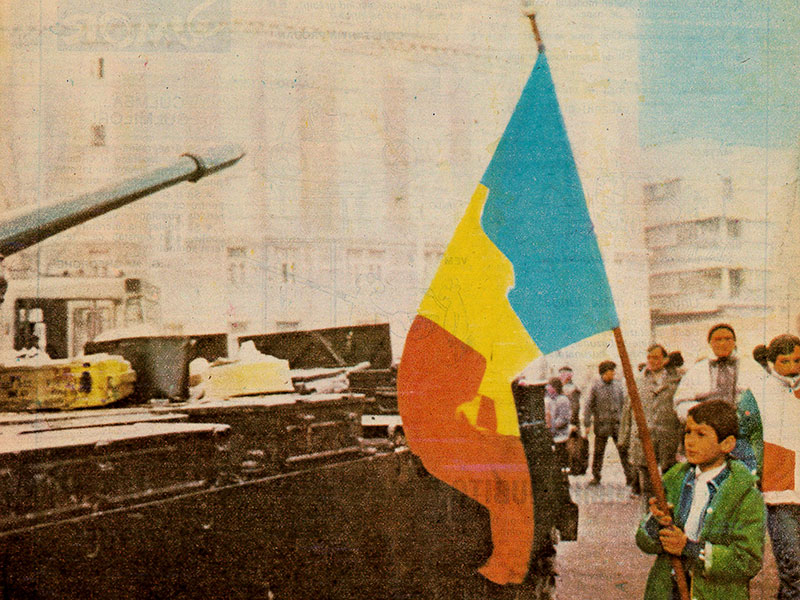 In this blog, Cristina Roiu of The Romanian Academy Library remembers the Romanian revolution through experiences and memories shared at a number of Europeana collection days held in Romania.

Every year, as we approach 21 December, I remember the 1989 Romanian Revolution events and the tragic death of my young friend Ruxandra.

And I also remember how content I was when the Europeana 1989 project came to Romania in 2014 and offered me the possibility to tell her story, a quarter of a century after her death.

For me, telling her story during the Europeana 1989 Collection Day in Bucharest was very necessary - to prove that her sacrifice was not forgotten and that we still remember her.

We gathered then many more stories of people who died young fighting for their freedom. The entire team digitising these stories were young people who didn’t know anything about the events of December 1989 or the communist times. The Europeana 1989 campaign in Bucharest was a very useful inter-generational conversation.

RELATED: Explore more stories about the 1989 revolution in Romania

Return to Romania after 1989

During our Europeana Migration Collection Day in Sibiu in 2018, we discovered the touching story of Maria Luise who emigrated to Germany but returned to Romania right after the 1989 Romanian Revolution.

'I emigrated from Romania to Germany in the year 1969, taking with me as important treasures these ‘letters’ sewn onto pieces of canvas, which reminded me of the hardest time of my life’ began Maria Luise.

Between 1958 and 1964, I endured the regime of the communist prisons in Romania for the guilt 'of having received a letter from a person in Germany’.

I remember the extremely hard life in prisons, where you had nothing, not even a piece of paper or a pencil to write a few lines to your loved ones. There were times of complete censorship and control from the communist authorities. I still managed to send some messages to my mother, letters ‘sewn’ with red thread on some textile pieces cut from my white shirt. The thread came from my blouse and the needle was borrowed from the ‘Men's Room’

After the revolution in 1989, Maria Luise returned to Romania. She says, 'Right after the events of December 1989 in Romania, I decided to turn back to my country.  My friends and relatives in Germany could not understand my decision: 'Why come back where you suffered so much?' But I felt I could contribute in my way to the rebirth of my country, so since 1990, I have been living in Sibiu.'

Fire at University Library of Bucharest

During the December 1989 events, a fire destroyed the historical building of the Bucharest University Library along with over half a million volumes.

RELATED: Heritage at Risk, our online exhibition exploring the natural and man-made threats to cultural heritage, from ancient times until today.

'On December 22 1989 at night, after sending my children to bed, I went to some neighbors not to be alone. On TV, soon after, I saw the horror! I couldn't believe it was true… The University Library, where I worked, was on fire! The injuries caused by the firefighters to the library seemed irreparable. Why do this? Why make so much culture ash?

On the morning of December 23rd, I hardly reached the centre, brought by a car that stopped at my praying signs. From the Palace Plaza, where the car had left me, I walked, passing near the Creţulescu Church, to the library. I climbed the steps from Creţulescu and saw with my eyes the reality on the television. From the tears that flooded my eyes, an amputated building rose in front of me… my workplace didn’t exist anymore.'

Following an appeal of the UNESCO’s General Director Federico Mayor in 1991, donations of over 100,000 volumes were received by the library from individuals and institutions in the country and over 800,000 volumes from abroad.

RELATED: Share your memories and experiences of 1989 by taking part in our #remember1989 blog parade