The industrialisation of World War I

Industrialisation played a major role in World War One. New military machinery could be produced at a much larger scale and at a much faster rate than before. Along with innovative technology, this led to one of the most devastating wars in human history.

This concerns the production of materials for military purposes - clothing, aircraft and chemicals - as well as infrastructures – construction, railway, ports – that were laid out during the war to facilitate the war effort and to ensure the housing and mobility of the people.

RELATED: Read this blog: The Treaty of Versailles: the end of World War I? 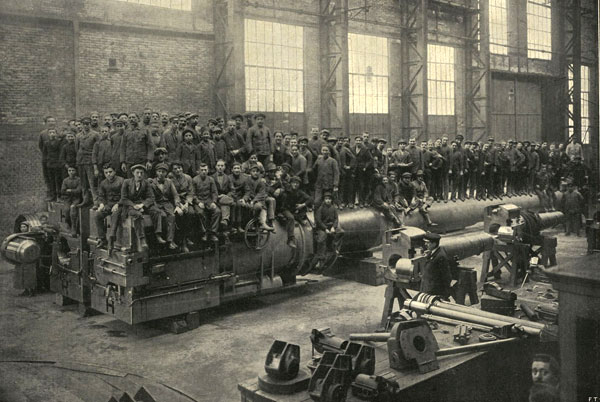 The new industrial effort also brought with it important societal changes, in particular the massive participation of women, who, as men headed abroad to fight, took their place in factories, shops and offices.

RELATED: Explore this gallery: Women in World War I

Other means of transportation that were new to the war were planes, used mostly to spy on the enemies and scout out battle territory from above, but they also carried guns.

The Zeppelin, a German creation from before the war, was lighter than air, filled with hydrogen, and held together by a steel framework. The German armed forces used several Zeppelins for observation as well as flying bombs, each capable of travelling at about 85mph and carrying up to two tonnes of bombs.

The major vehicle that was to play a decisive role in the last years of the war was the tank, a British invention. At first it was mainly used to cross battle areas safely, but soon a more offensive version was developed which had a revolving turret. The French fielded their first tanks in April 1917 and ultimately produced far more tanks than all other countries combined. In 1918, the manufacturer Renault produced more than 3,600 tanks.

Mustard gas, or Yperite, was first used by the Germans in 1915 in the battlefields around Ypres. The sulphur based gas caused burning in the throat and chest and eventually suffocated its victims. One problem that often arose with gas was that the wind would blow it back at the troops who used it, harming the own troops instead those of the enemy.

RELATED: See how artists depicted war machinery in this chapter of our World War I exhibition 'Visions of War'

Flamethrowers date back as far as the 5th century, but World War 1 brought about a portable and far more destructive version. The weapon brought extreme fear as it was something that had never been seen before. By the end of the war flamethrowers had even been added to tanks.

International world trade became more and more difficult because of global warfare and trade embargos, making the import of necessary resource materials difficult if not impossible. A growing effort was made to become independent and replace resources for other materials. In this video is shown how the production of belt straps is made possible by the use of paper and iron instead of leather and rubber.