On the Anniversary of the Stonewall riots, the highlight of LGBT+ pride month 2018, we dive into Wellcome Collection’s rich stores of queer heritage and take a look at an album of Victorian-era photographs from the James Gardiner Collection. 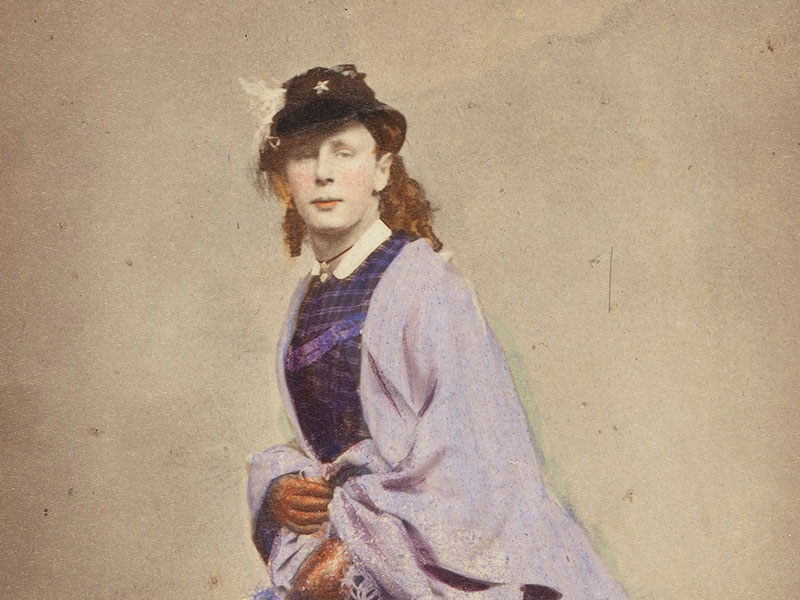 Stella is photographed sideways, with hair braided into a crown and in a billowing dress. The blush on her cheeks and the colour of her lips and dress were added later to the sepia photograph, now faded in places but still vibrant in others. Who would think this innocent photograph of a beautiful Victorian lady depicts the same person who stood trial in a case that attracted considerable attention from the Victorian-era London public. Stella, known to the court as Ernest Boulton, became famous in Victorian London for standing trial for wearing women’s clothing and alleged homosexual offences.[note]Fanny and Stella, the young men who shocked Victorian England, Neil Mckenna, Faber & Faber, 2013, pp. 25-26.[/note] 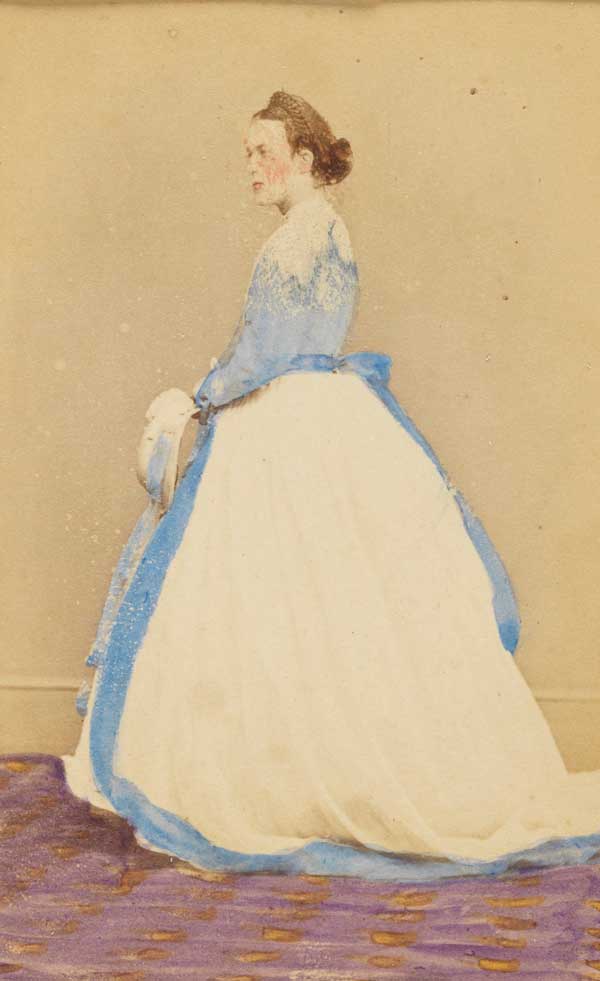 Before the trial, Ernest had toured frequently with his friend, Fredrick Park, in a theatrical double act where they dressed up in women’s clothing as Fanny and Stella. They were often seen at, and sometimes ejected from, social events and theatres around West London in drag. On a spring evening in 1870, they were both arrested and brought to the magistrate’s court under the accusation of performing ‘homosexual acts’. Ernest and Fredrick were still wearing their dresses when they stood before the magistrate, which elicited a buzz from crowds that had gathered to watch and fueled newspaper reports all across London.[note]Fanny and Stella, Neil Mckenna, pp. 27-28[/note] Both ended up being acquitted because of lack of evidence and the absence of an actual law that forbade men from wearing women’s clothing.[note]Fanny and Stella, Neil Mckenna, pp. 572-574[/note] 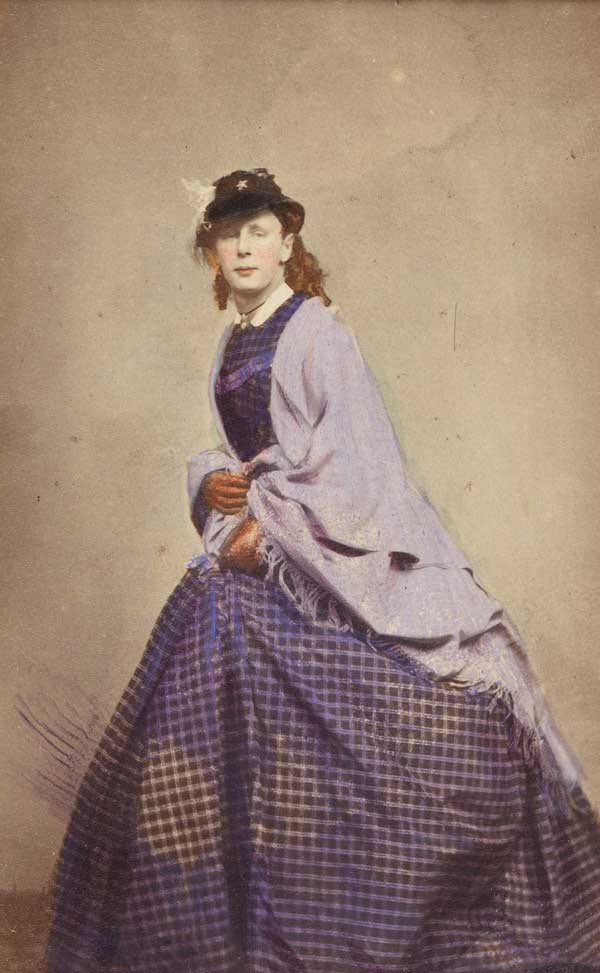 That Ernest liked to dress up in drag was unmistakably true, as one of the pictures in a Victorian photograph album proves. The rest of the album is filled with 31 other pictures of men dressed as women in different poses and configurations. Some wear earrings, others have their hair adorned with tiaras or flowers, and others hold colourful fans or dolls. Colour was added to a lot of the sepia pictures to show the bright blue and pink dresses, the glimmer of a pearl earring or to shade lips and blushing cheeks. Although Ernest was sometimes very public about his sexuality and presentation, this was probably very different for most of the other people featured in this photo album. Ernest is the only one photographed we know by name. 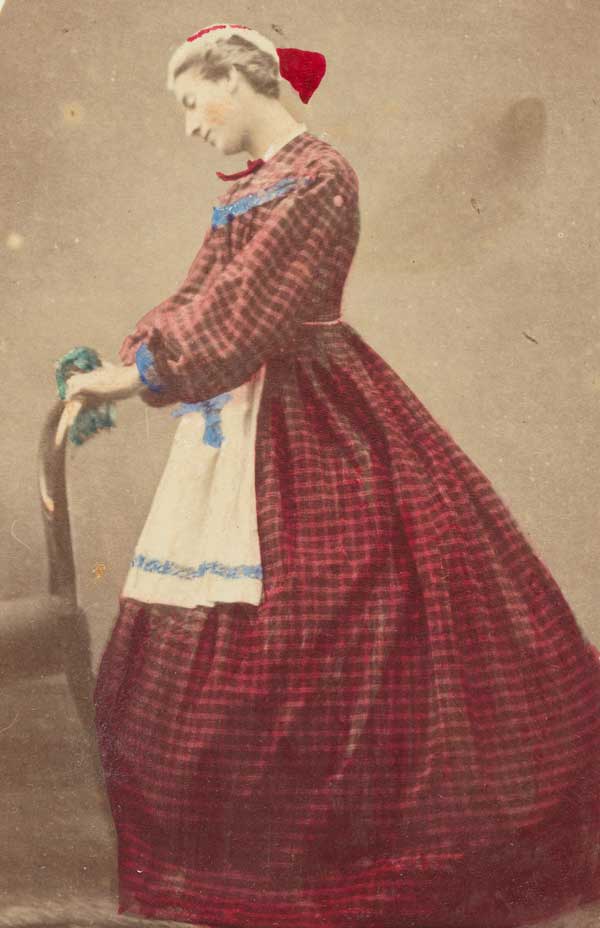 James Gardiner is a researcher and author who specializes in collecting historical photographs depicting what he calls ‘gay life’. In his own words: “ How can you have a photographic history of something that was, until very recently, something to hide, not photograph? And for a great many men, still is.[...] Many of us devote enormous energy to making sure that our appearance does not betray us in the wrong place - but does announce us in the right place. The camera, which denies us this flexibility, which fixes everything for ever in a frozen image, in black-and-white, can be a dangerous weapon in the wrong hands.” In a completely different era and context, the raids and subsequent riots at The Stonewall in 1969 are eerily similar to the Ernest and Park’s story in their use of publicly visible and invisible subversion of norms, their prosecution by authority, and their subsequent liberation from oppression. Stonewall remembrance day is about looking back at how others have stood up for their emancipation, and the need to continue subverting and questioning norms. Explore Wellcome’s Victorian photograph album collected by James Gardiner here. Read more about Fanny and Stella in Neil Mckenna’s 2013 book ‘ the Young men who Shocked Victorian England.’