The Bor mine in Eastern Serbia developed and industrialised rapidly in the 20th century, bringing the development of this region in an unexpected direction. However, the hasty development of the Bor Mine did not result in the growth of working standards. 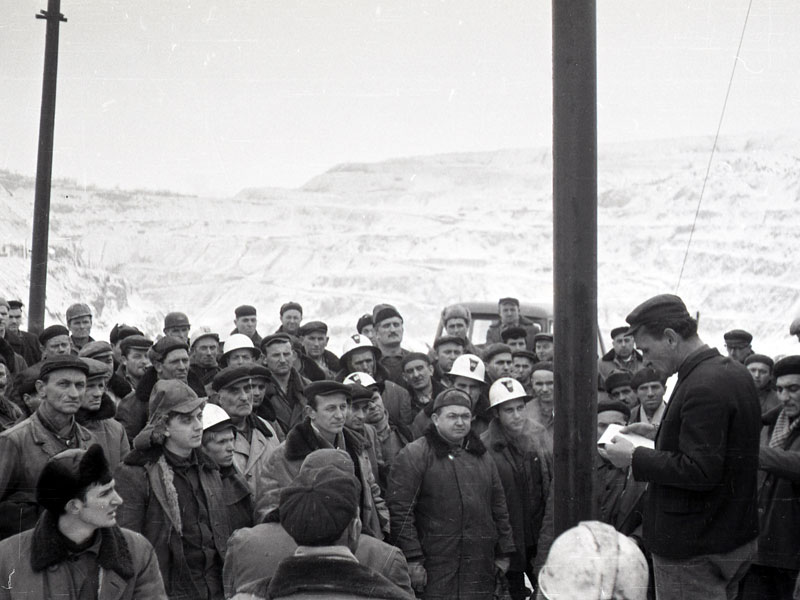 This blog looks at conditions and protests at the Bor Mine in Serbia, and uncovers what may be one of the first environmental protests in Europe.

In the 1900s, the early years of the mine, the working conditions were very harsh, wages were quite low and workers did not have the necessary machinery. Sulphuric fumes released in the ore-smelting process had a devastating effect on agriculture in the area surrounding Bor.

RELATED: Read blog: The Bor Mine in Serbia: labour and landscape throughout the 20th century

In 1908, all this brought about the first strike, organised by the Social Democratic Party of the time. The strike was quickly quelled and the request to determine the scope of the damage caused by mining fumes to agriculture, directed at the Kingdom of Serbia Ministry of Economy was completely dismissed.

Following World War I, the spread of socialist ideas throughout the Bor Mine was met with harsh resistance from the authorities. The situation was further aggravated when the Yugoslav Communist Party was banned. The 1920 decree banning the Communist Party also banned general strike calls, which was detrimental to any form of trade unions in the mine.

The period between 1929 and 1933 was particularly harsh as the global economic crisis further influenced labour cost decreases and high unemployment rates impacted the Bor mine.

Union control of this mining basin was also minimised, resulting in widespread environmental pollution. At that time, the local population was faced with the harmful consequences of industrialisation. The smoke coming from mining chimneys brought about nothing but trouble. Acid rains destroyed the land and crops, while the air and water contained sulphur and other metals released in the production process. The mine owners refused to pay the damages caused by the pollution.

However, despite the bans and increased supervision, around 400 local inhabitants gathered outside the Bor police station on 7 May 1935.

Having been ignored by the local authorities, they proceeded to demonstrate their discontent at the mine by interrupting the workflow. They demanded that the Bor Mines authorities make efforts to ensure purification of the smoke coming from the smelter - so as not to affect the land, air and water.

Since their demands continued to be ignored, they gathered again five days later. This time, there were around 4,000 protesters. They also claimed damages for crop failure as well as employment benefits since they were no longer able to continue working in agriculture.

This marked the first environmental protest in the former Yugoslavia and, perhaps, Europe as well.

It was organised by the miners and agriculturalists together, bearing in mind the implications of such an undertaking. Unfortunately, during the protest, around 500 shots were fired at the protesters, resulting in a miner’s death, while another one was seriously wounded and a dozen others were also injured.

RELATED: Explore this gallery of industrial strikes and protests

Following these unfortunate events, the mine authorities made a commitment to install smoke-purification facilities and build a sulphuric acid factory.

Not only did this turn of events in the Bor Mine result in the development of trade union activities, but it also set forth socialist propaganda striving to raise political and environmental protection awareness amongst the workers.

In 1934 and 1935, Đorđe Andrejević Kun, a socially-committed artist, visited the Bor Mine illegally multiple times, portraying the daily lives of the miners. As fate would have it, some of his graphics captured the tragic events of the environmental protest of May 1935.

In 1936, he published his graphics, titled Krvavo zlato (Blood-stained Gold), illegally. Not only was this a revolutionary way of fighting for one’s causes, extending the scope of the influence of art, it also became a call for the future by marking a mine as a possible place of confrontation, both of the class and environmental nature.

Since its founding, the landscape of Bor and the surrounding area have changed completely. The actions of the local population in the 1930s mark a beginning of our awareness of the effects of industry on ecology and landscape, something which, today, is of even greater and more urgent importance.

Have you or your family taken part in industrial protests? Share your story and help us tell the story of Europe through our working lives in the past and the present.