Street photography could well be the oldest form of photography, as the medium was initially invented to capture and study life in its purest form. The first still and moving pictures were mostly aimed toward illustrative outcomes, such as the work of the Lumière brothers  (who captured common street scenes, e.g. their employees leaving their factory), Eugène Atget (who documented Paris in the pre-Haussmannian era) or Eadweard Muybridge (who developed photographic techniques to study movement).

Capturing the intangible and elusive features of life has always been somewhat difficult to crystallize into absolute theories and definitions. Therefore, the ability of an artist to go beyond established aesthetics in order to simply demonstrate, in new and fresh manners, what life really looks like, has continuously been praised. An impressionist painter and photographer alike, George Hendrik Breitner, was the creator of many powerful pictures of life in the Netherlands at the end of the 19th century.

He focused on street scenes, portraits and intimate shots, often as reference material for his paintings - which earned him great acclaim. But his photographic oeuvre, beside and beyond underpinning his painting process, also set the course for future documentary photography. Beyond its artistic value, this oeuvre also serves as a very early testimony of proper street photography codes and offers a compelling vision of the laborious life of Dutch (anonymous) people at the beginning of the industrial age. 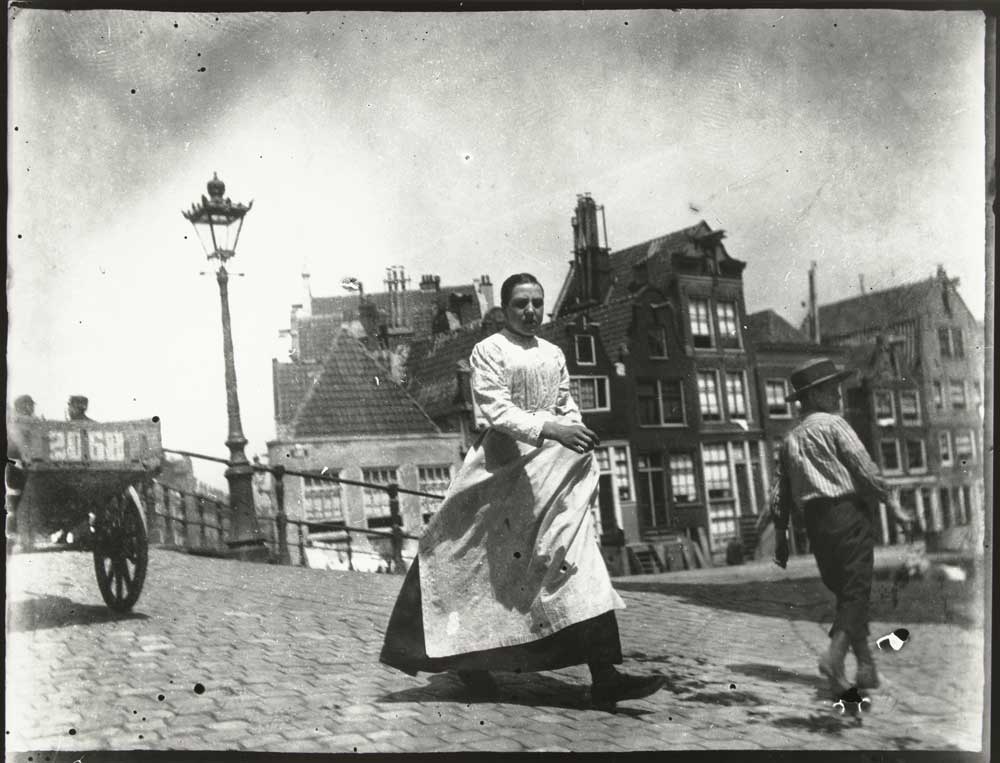 Straatgezicht op de kruising Lindengracht Lijnbaansgracht in Amsterdam (Street view of the intersection of Lindengracht Lijnbaansgracht in Amsterdam), in my view, represents all of those characteristics. First, the simplicity of the frame drags the spectator in, owing to the crossing of two strong diagonals right at the focal point of the scene: a lady, probably on her way to a next task during her working day. Despite the fact that the shot depicts other moving elements as a wall (the wagon in the background and the boy on the right), the intensity of this leading lady is striking. Her determined gait and dismissive gaze - barely acknowledging the presence of the camera (at a time when such an apparatus was rather noticeable and still very uncommon) are enough to make this picture a compelling showcase of life: undisturbed in her daily routine, wrapped like a Greek goddess by her floating apron, this woman is called by a duty and a purpose we will never know.

It’s easy to look at this image and to get reminded of our own hectic daily life. Or to get us pondering on social inequalities. All this in one picture of a street corner: that’s the magic of photography. Enjoy more photographs by Breitner in this Europeana gallery.