John Topham was a British documentary photographer who captured a changing Britain. Today, PHOTOCONSORTIUM's Fred Truyen introduces us to Topham’s Lover’s Lane, 1938, as his Picture of the Month. Today, John Topham’s collections are managed by the British picture library TopFoto. My friend John Balean, who works there, did some research and found a print of this image with a caption reading 'A young couple head for Lovers Lane but only find a dead end to the Swanscombe Paper Mill – 23 March 1938'. In that era, this area of North Kent was rapidly evolving as a consequence of the industrialisation process. The work of John Topham depicting this region is a testimony both to a lost rural world and to industrial prowess. So there is some ambiguity in this choice of subject. 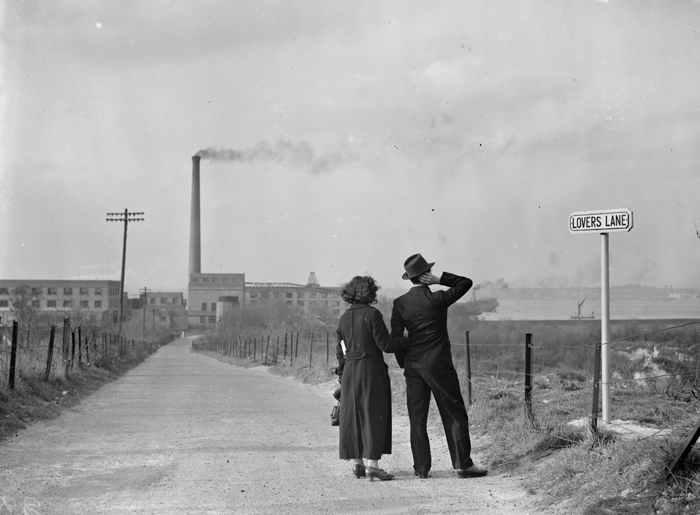 Lovers Lane, 1938. John Topham. TopFoto. In copyright. When showing this image (which is part of PHOTOCONSORTIUM’s travelling exhibition All our Yesterdays), I’m always struck by the reaction of younger members of the audience. They all have the same question: why on earth is this young couple venturing into a filthy industrial zone for a supposedly romantic walk? Times and perceptions have changed, evidently. While we are very sensitive to pollution today, this wasn’t the case in the late 1930s. Industry meant progress, bread on the table, a steady income, a future for the children and the power to keep rival nations at bay – which would prove a grim necessity only a few years later. Besides this changed perception of what would be the ideal decorum for a romantic walk, another aspect is bound to strike today’s spectators: the strong gender coding of the depicted couple. Here we have a strong man, bristling with self-confidence, seemingly in control of things as he oversees the Thames river. His neat suit puts him at the winning end of society, expressing success and accomplishment. What a difference with the way in which his female companion is depicted! At best, she’s not an obstruction to her partner, and no more than a subdued accessory to the powerful scene. Her posture is static, supportive, almost rigid compared to the dynamic body language of her partner. This image is not a contemporary one, for sure, and this aspect of the scene clearly puts it in a different era! That doesn’t make it anything less than brilliant though - for the above reasons and many others too, such as the balanced implementation of the rule of thirds, the superb composition, the play with contrasts to highlight the main topic, etc. I hope you like it as much as I do!