No bees, no honey; no work, no money

An introduction to Scottish work songs

Work songs were commonplace in Scotland for hundreds of years and, whatever the activity, there would be a song to accompany it and match the speed at which it was being undertaken.

These songs also served a social purpose, as they enabled people to relate specific thoughts about their communities and the subjects which were important to them. Songs sung together also generated a bond between the participants, giving a sense of attachment and of sharing experiences while toiling together. 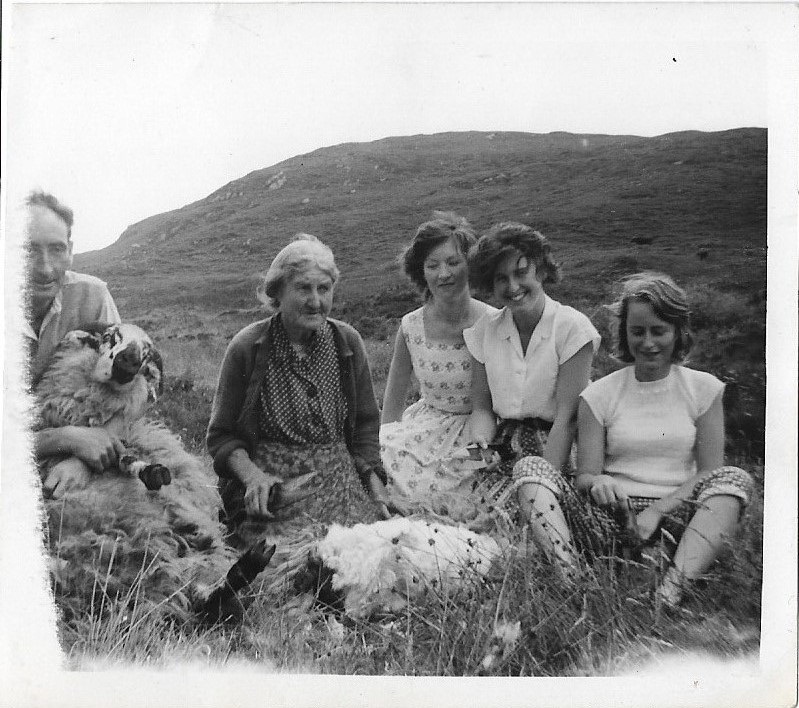 Crofters taking a break from sheep-shearing. Picture by Mairi Lindsay. CC BY-SA There are two main categories of work songs- those which were sung while work was being done and those about work which were sung in people's leisure time. Songs in the first category include those which were sung while waulking, milking cows, rowing, spinning wool, and churning butter. Waulking was the last stage in the production of homespun tweed and was a process in which the cloth would be beaten rhythmically, usually by hand, to shrink and soften it. It would generally be carried out by a group of between eight and twelve women on a hard surface, such as a table. Waulking songs would be sung throughout this laborious process in order to keep the rhythm and make the work a little easier. It was also a social occasion, with the opportunity to catch up on local news and gossip. Typically, one woman would sing the verses of the song and the others would join in on the chorus. You can hear an example of this is in the waulking song ‘Gur Mis’ Tha Fo Èislean’, which is sung here by Penny MacLellan of South Uist in the Western Isles from a recording made in 1949. In the first part of the song, a woman watches a female deer and her mate playing together and, unlike the woman, they are happy. In the second section, the composer wishes she could spend a week in the form of a goose, mallard or seagull.

Cattle played a significant role in the economic livelihood of the Highlands and one of the tasks relating to them was milking cows by hand. Milking songs were sung to pacify them and encourage them to give as large a yield as possible. Click below to hear the milking song 'Till an Crodh, Fair an Crodh', sung by Iseabail T MacDonald of South Uist. This composer asks the subject of the song to bring back the stolen cattle and says he will get a beautiful wife in return.

Many Scottish communities in coastal areas and islands were dependent on the sea for their livelihoods and for travel to and from the mainland. Men rowing boats would sing choral songs which would match the stroke of the oars and help those rowing to forget their hardships, even in squally weather. Listen to James MacDonald from the Isle of Skye sing the rowing song ‘Iomaraibh Eutrom Hò Hò’ in 1955. The chorus of the song asks the crew to pull the oars lightly.

The second category of work songs includes bothy ballads, songs about whaling, fishing, mining, and railway and mill work. Bothy ballads originated in the farming areas of the north east of Scotland, at a time when unmarried farm labourers lived in outbuildings known as bothies. Conditions in the bothies could be grim and the cattle and horses often had better accommodation than they did. In the evenings the labourers would sing to entertain themselves. As well as old songs, they would compose songs about their experiences on the farms. Often the songs would be critical of the farmer, although a few were praised, and these social commentaries of country life came to be known as bothy ballads. One such example is ‘The Barnyards o Delgaty’ in which the composer pokes fun at the farm on which he works and the other farm workers. It is sung here by George Inglis Fraser from Aberdeenshire.

The creation of factories, mills and railways during the Industrial Revolution meant that it was no longer possible to use music to synchronise action between workers in such noisy environments. As a result, workers used songs with which they were familiar, such as ballads and agricultural work songs, and adapted them to their new experiences and circumstances. These songs would describe their work and working conditions, and some of them were political in nature. The building of railway lines was very labour intensive and the men who worked on them were known as navvies. Most of the work was done by hand and the standard tools of the trade were shovels, picks and wheelbarrows. Incidence of death at work was high, especially for those building tunnels, with the added risk of explosions and tunnel collapses. In this song entitled ‘The Navvy’, the composer sings of his life of travel and work, and the important role which the navvies played in developing the infrastructure of cities and towns. It is sung by William Taylor from Dundee.