The fascinating folklore of mermaids

The Deutsches Historiches Museum #DHMMeer in Berlin is running a Europe and the sea blog parade from 20-25 July 2018, asking people to share posts on the theme 'What does the sea mean to me?' To me, one of the things it means is mermaids. So I revisited a post I wrote a while ago on that topic, and checked out Europeana Collections again.

In the intervening time, we've published more mermaids - so this post from 2013 has now been updated with a gallery of more beautiful and historic mermaid material. I've always been fascinated by the folklore around mermaids, so when I had the opportunity to travel to Copenhagen, Denmark, I had to take the time to seek out this little lady... 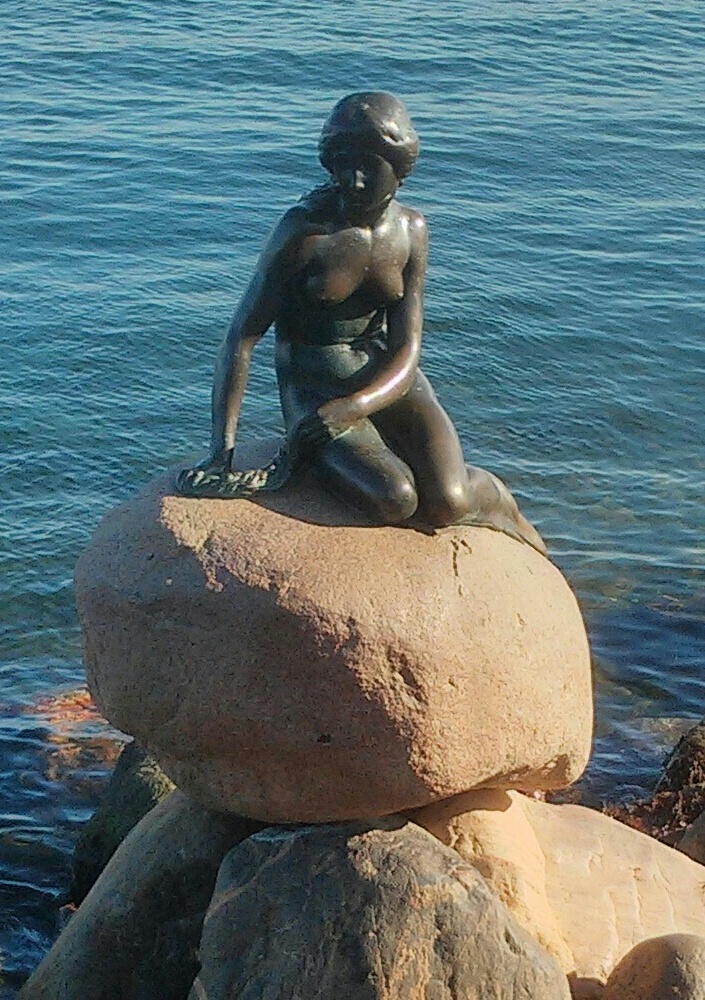 Photograph of 'The Little Mermaid', by Edvard Eriksen, in the Copenhagen sunshine. Beth Daley, CC-BY-SA.

The statue by Edvard Eriksen is inspired by the Hans Christian Andersen tale, 'The Little Mermaid'. It was put in place in Langelinie, Copenhagen in 1955. Andersen's tale is a tragic one, its semi happy ending tagged on, some say, rather uncharacteristically. The little mermaid princess gives up her mermaid form to pursue a human prince. But he marries someone else and she dissolves into sea foam (tragic ending), only to be turned at the last minute into a spirit with an immortal soul (happy ending).

I think one of the reasons I am fascinated by mermaids is because they are elusive and rarely seen in their mermaid form by humans. This means that mermaids could be all around us and we wouldn't know. Those that do see or hear them rarely live to tell the tale - sailors captivated by a mermaid song are lured onto rocks and wrecked. Mermaids who marry human men and live on land adopt a human form. So, if you're the type who believes in fairies at the bottom of the garden, dancing just out of sight, you may also be the type to believe in mermaids or mermen living amongst us - who couldn't be persuaded that the ghostly sound we hear in the wind during a brisk winter walk along a coastal cliff path isn't the sound of a mermaid hidden amongst the rocks below us, or that what is tickling our feet as we paddle isn't seaweed but a miniature mermaid?

Mermaids are contradictory creatures: they are neither women nor fish; they enchant sailors but lead them to their deaths. In popular folklore, they are innocent and beautiful, think Ariel from the Disney film, but their mythology also involves more gruesome figures. 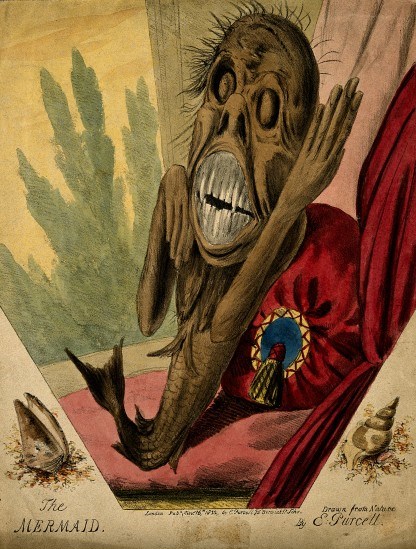 A grotesque mermaid, amidst luxurious cushions and drapes, 1822. Wellcome Collection, CC BY

After finding Eriksen's statue, I did a little more walking around Copenhagen and also discovered these guys... 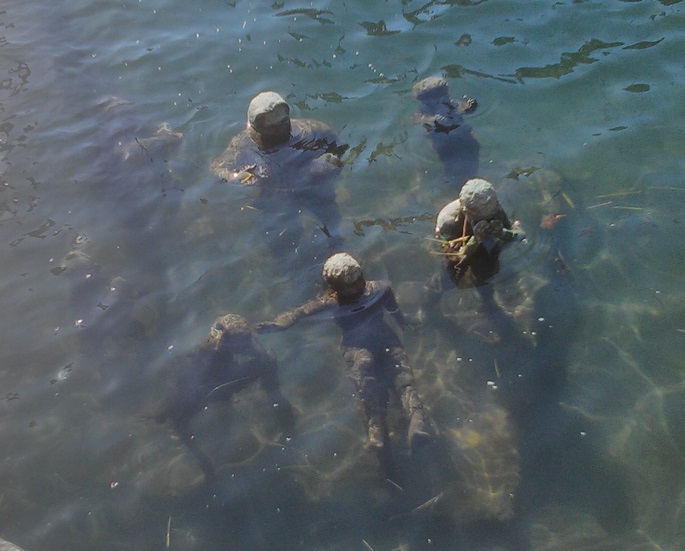 The bronze statues are positioned underwater in a canal in the centre of Copenhagen.  The story goes that the merman fell in love with a human woman who agreed to live with him underwater. There, she bore him seven sons but one day, feeling homesick, she followed the sound of the town's church bells, left the sea and never returned. The sculpture shows her family (the seventh son is in his father's arms) trying to find her and begging her to return. The fact that three of the statues were, when I saw them, half-in half-out of the water added to their anguish - did these creatures belong in the water, or out of it?

This question of belonging and of place is central to mermaid mythology, they are half-human, half-fish, they are neither one thing nor another, so how can they belong fully in either place? To belong in one world they must give up something from the other - for the mermaid in Hans Christian Andersen's tale, to remain a mermaid, she would give up the chance of love, but to live on land and pursue her happiness, she gave up first her voice, and then ultimately, her life. As an in-betweener, the mermaid can be read as a metaphor for growing up (think Disney's Ariel again). As teenagers and even as adults, I'm sure we've all felt as though we don't quite belong. But I'm not advocating their transformations. Why be limited and be wholly one thing or another? Hybrids are great. Long live the mermaid.