One man's mass production of opera

Around 170 dramatic secular and 40 dramatic sacred works: this is the number of works that Italian composer Antonio Draghi created over the course of 30 years. He is said to have written around 6 operas per year on average – with a creative peak of 11 operas in 1685 alone.

In the two collections of the music department of the Austrian National Library, content from which was made available on Europeana Collections as part of the Europeana Sounds Project (the Tresorsammlung (Safe Collection) and the bibliotheca cubicularis (Bedroom Library) of Emperor Leopold I), Antonio Draghi is the most featured composer of the bibliotheca cubicularis.

From Padua to Vienna

Antonio Draghi was born around 1634 in Rimini, Italy, and died 1700 in Vienna. His exact birth date is not known, but can be reconstructed from his death certificate, which states that he died at the age of 65. Information about Draghi’s youth is scarce.

The earliest valid information we possess directs us to the basilica of St. Antonio in Padua, where he started out as a soprano in 1645. He stayed there almost continually until 1651, when he left as a bass singer.

Afterwards he worked at the Accademia della Morte in Ferrara. His career in Vienna started in 1658, when he joined the newly founded Kapelle (chapel) of the dowager empress Eleonora Gonzaga, the widow of Ferdinand III, as a bass singer. The Kapellmeister (director of music of a chapel) during this time was Giuseppe Tricarico, who also came from Ferrara to Vienna.

Draghi had to wait some 3 years, until 1661, before his creative output in Vienna started - the same year he married Livia Seliprandi. In the first compositions he worked on, however, he did not act as a composer, but as a librettist. This might be due to the fact, that, during that time, good musicians were always at hand at the Viennese court but poets were rather scarce.

One of the first texts he wrote was “L’Almonte”, in 1661, with music by Giuseppe Tricarico. In the preface for this and other operas, Draghi stresses that he is first and foremost a musician and not a poet. He wrote libretti for several other composers like Antonio Bertali, the Hofkapellmeister (the director of music of the court chapel) during this time, or Pietro Andrea Ziani, who was the successor of Tricarico at Eleonora’s Kapelle. 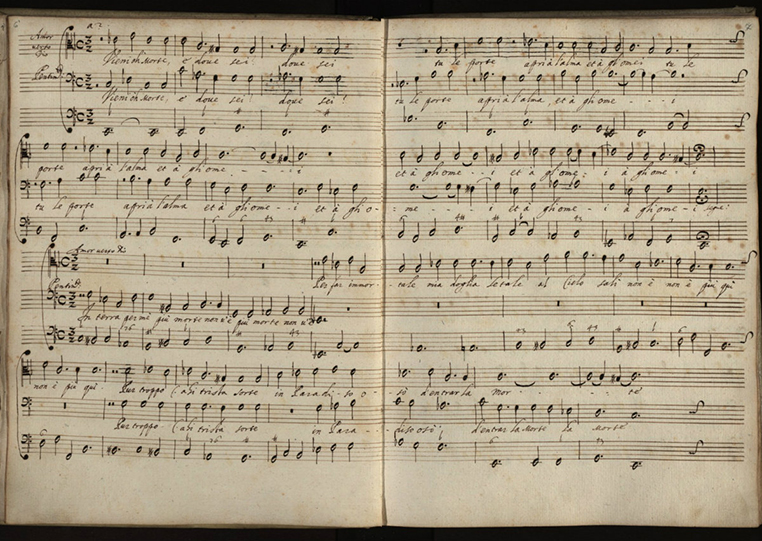 The Emperor Leopold I was also an accomplished composer (see also the blog post about Leopold I and his relation to music, published on Europeana Sounds' blog) with Draghi occasionally writing texts for him too.

The title page and the beginning of the third act of “Apollo deluso”, which music was written by emperor Leopold I with “poesia” by Antonio Draghi. (Mus.Hs.16898 Mus) – Austrian National Library – Public Domain

The first work where it can be said, with certainty, that the music was written by Antonio Draghi himself was “La mascharata per musica” in 1666. It was an opera for Carnival and was the first comical opera that was ever shown in Vienna.

The title page and the beginning of “La mascharata per musica”, which was entirely written by Antonio Draghi (Mus.Hs.16911 Mus) – Österreichische Nationalbibliothek – Public Domain

In 1667 his workload started to increase due to the marriage of Emperor Leopold I, for which great festivities were being arranged. In the following year Antonio Draghi was made Vice-Kapellmeister of Eleonora’s Kapelle and finally replaced Pietro Andrea Ziani in 1669.

This was also the year in which Draghi wrote “Il Perseo”, with a libretto by Aurelio Amalteo, which he is said to have finished in just a couple of days. Amalteo apparently greatly admired the speed with which Draghi composed, and that he was able to finish a work in the time that most other composers might just manage a few sketches.

Draghi stopped writing libretti in 1669, when Niccolo Minato was appointed court poet. As their creative abilities were well-matched, a hugely productive collaboration began, lasting several decades. From around 1670 until 1698, they dominated the production of dramatic music at the Viennese court.

Together they produced around 150 works (operas, sacred works and smaller dramatic works).

The beginning of “Le risa di Democrito” performed during carnival in 1670 (Mus.Hs.16279/1-3 Mus) – one of the first pieces on which Minato and Draghi worked together - Austrian National Library – Public Domain

Although Draghi was Kapellmeister of Leonora’s Kapelle, he also composed a lot of dramatic works for the Emperor. Thanks to his great commitment to this work, and because his duties in this area were continually increasing, he was named “intendente delle musiche teatrali” (director of dramatic music) in 1673 and received a higher salary.

He usually wrote operas and other works for birthdays and name days of the Emperor, the empress or the dowager, as well as pieces for carnival. Usually, the plots of the operas were about Greek or Roman history or mythology. He also wrote sacred dramatic music: Oratorios for Lent, Sepolcri for Maundy Thursday or Rapprensentazioni sacre for Good Friday.

A third collaborator often joined Draghi and Minato in their creative endeavours - Ludovico Ottavio Burnacini - and the three men formed a well-known trio during that time. Burnacini was an architect and scene-painter and created opera houses and sceneries for operas (for example for Pomo D’oro).

One of the grandest pieces the three of them worked on together was probably “Il fuoco eterno custodito dalle Vestali”. The work was originally composed for the celebration of the birth of Leopold’s first child with Claudia Felicitas, Maria Anna Sophie, and was performed on the day of her first public appearance in October in 1674. In a wider sense, the piece was allegorically connected with the marriage of Leopold with Claudia Felicitas one year earlier.

The performance was held in the “Theatre on the Cortina”, a very grand theatre constructed by Burnacini, which was inaugurated with a performance of “Il pomo D’oro” in 1668. Ludovico Burnacini created 12 sceneries for “Il fuoco eterno custodito dalle Vestali”. Below you can see the curtain he created for the piece.

The opera was newly adapted for the birth of Joseph I as “La Monarcha Latina trionfante” in 1678. In the beginning of 1682, Antonio Draghi was appointed Hofkapellmeister, leaving the Kapelle of the dowager empress and continuing his duties at the Kapelle of the Emperor.

Due to his hard work and his numerous compositions, Draghi earned a good living and owned several houses. Around 1687 he began to suffer from gout, but coped with it for 10 years before it had a serious impact on his work as a composer. Even then, he maintained the post of Kapellmeister until his death in 1700. You can browse through all items the Austrian National Library has provided of Antonio Draghi within the Europeana Sounds Project here, or find more of Draghi's work on Europeana. Written by Zea Frana from the Austrian National Library.